It's been close to a week and a half since my last update and with all my recent arrival of parts I figured now would be a good time for another update.  It's been rather crazy at my house full of deliveries pretty much every single day, parts for my car, Becca's car, and other random things here and there.  It was rather fun actually, come home to a box at the door step, it felt like Christmas all over again!

Anyway on with the parts.  First off I would like to say one thing about the motor mounts I ordered.  Unfortunately, or for all I know this could be for the better.  Touge Factory isn't going to be carrying Avid Mounts anymore (guess that explains the crazy sale price) and they had run out of the 90A bushings.  Since they aren't carrying them anymore they couldn't get me a set of 90A but they did have some 75A and solid trans mount options which I decided to go with.  I think these should be plenty stiff  and if not I'm sure I can get in touch with Avid Racing directly and order a pair of bushings for fairly cheap. 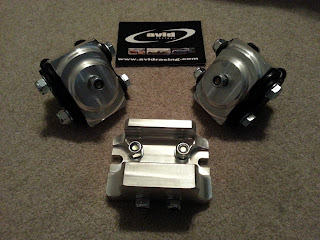 Now for the rest of the parts which all went according to plan and I even had a surprise in store for me.  PBM shipped out my handbrake, the tie rods still aren't back in stock yet but oh well, my knuckles haven't shipped yet so it's not like I need them right at this moment. 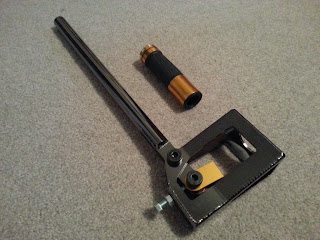 New pillow ball mounts for my Stance Coilovers which also came with the camber plates and new hardware. 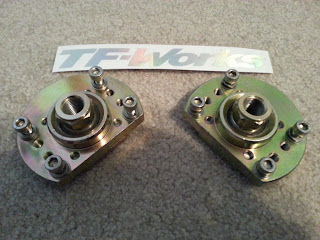 Got all new wheel bearings for all around.  Pretty excited about putting these on.  I know it sounds weird but I just want to share what I've learned about wheel bearings with everyone. 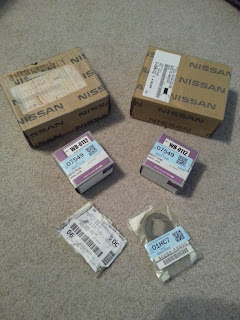 Also I made the commitment to make the switch to speed density.  I run open BOV and I want to continue running my car that way.  I also don't like the looks of the MAF sensor in the bay and how much room it takes up.  Lastly I have nightmares about an intercooler coupler blowing apart on me and I want to be capable of driving my car home if that ever happens.  I went with AEM sensors, 3.5Bar MAP and Intake Air Temp. 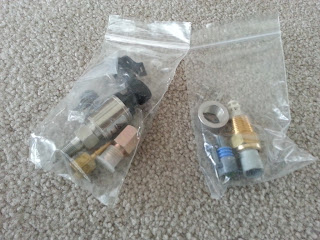 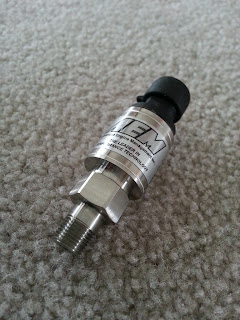 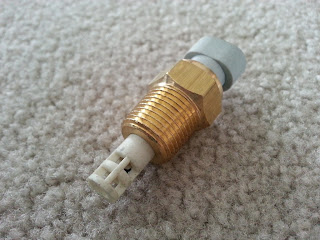 I'm very incredibly pleased with the AEM sensors.  They are very well built and designed, comes with all new plugs and pins, the map sensor has optional attachments AN fitting or Barb fitting which is really nice to have.  I was also very pleased to see the IAT sensor came with a bung for welding onto my intercooler piping.

Now I think that should cover all of my part arrivals.  Time to move on to what's been keeping me busy this past week.  My lady love, Becca, had her birthday on April 6th.  I think I might have been more excited about it then she was.  Mainly because I couldn't wait to give her the gifts I bought her.  I did a lot of research and came to the decision it was best I fork over some cash and purchase her a proper professional quality tripod and fluid video head.  She is going to be documenting my drift season this year after all, and be making some videos on the side so I know it'll go to good use. 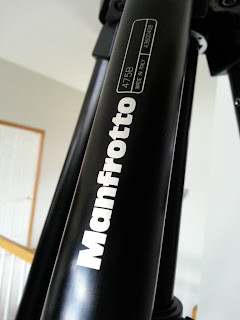 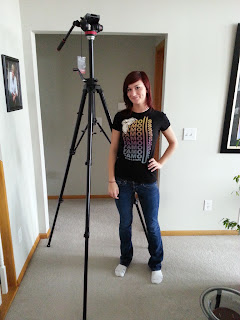 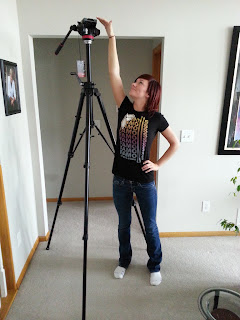 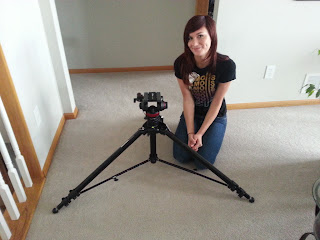 Along with the tripod I also got her this really neat 6600mah external battery.  I don't think we'll ever have to worry about batteries dying on us during events anymore (had it happen to me twice, absolutely sucks.  It's equivalent to running out of tires during an event). 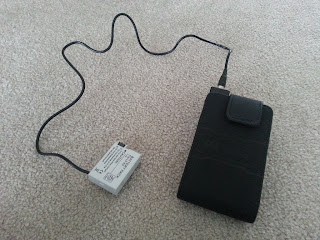 Parts and camera stuff out of the way, time to move on to Becca's drift car.  I'm sure most of you remember we went out and got her a 300zx not long ago.  Well the clutch in that thing was beyond gone, which is why there haven't been any sweet pics of it getting sideways.  Good news for you all!  The clutch which had been on back order for 2 months finally arrived!  So I've been busy working on getting that in the car while running into old car problems along the way.

With how happy I've been with ACT clutches over the years, and how satisfied I have been with my 6 puck unsprung in the 240 we decided that would be the best route to go with the Z32.  Also knowing the clutch in the car has been slipping and sliding more than socks do on a freshly polished wood floor I figured she was going to need a flywheel too which I surprised her with. 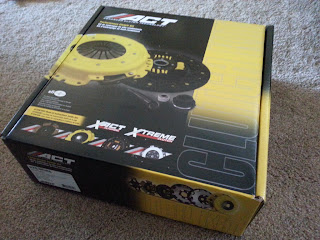 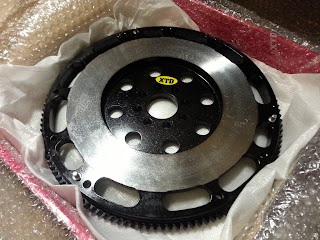 I know it's a cheaper brand flywheel, but I've had a lot of pleasant experiences with XTD flywheels and a lot of people I know have as well.  Plus I think the quality they are will really surprise most people.

For those of you who don't know, I have had one bad experience when it comes to clutches and flywheels...Flywheel bolts are my enemy.  I've had them back out on me not once, but twice.  After that happened to me, I've vowed to never reuse flywheel bolts no matter how relatively new or nice of condition they are in.  With Becca's car, I want to do everything nice and proper.  Build it to be strong and reliable, so I looked around for some ARP bolts which I found they don't make kits for the Z32.  Luckly tho after looking around long enough I did find a guy who sent a stock flywheel bolt off to ARP to have them make him a huge batch of bolts which he sells in packs of 8.  Boo Ya!  Got some ARP flywheel bolts!  Remember, just because something isn't out there on the market, doesn't mean you can't get it. 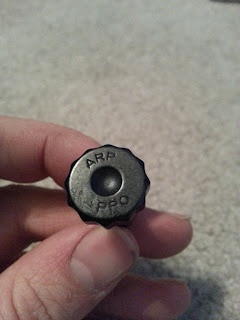 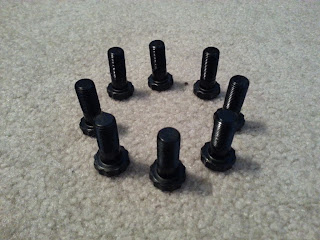 With everything here it was time to work on the clutch.  Right off the bat ran into old car problems.  Every exhaust bolt snapped on me.  The headers being the worst.  The studs were stuck in the flanges and the flanges themselves were super incredibly rusty with pits.  There's no way these would ever properly seal up again and there was no way I was going to drill out the studs.  So we ordered a set of headers.

While waiting for the headers to arrive to continue work on the car I decided it would be a good time to delete this junk EGR system on the car which weighed around 10lbs and didn't really do anything other then clutter up what little room there already is. 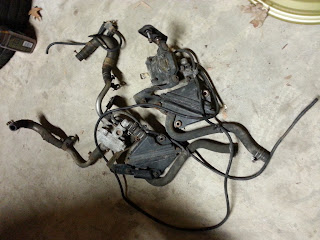 I also dropped the trans and removed the old clutch/flywheel. 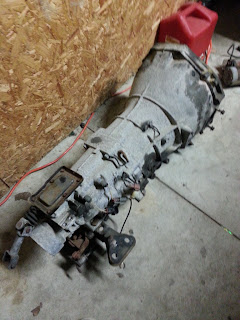 Then the headers arrived which I finally just got on last night.  With no room to work it was rather interesting to do and took some creativity to reach all the bolts. 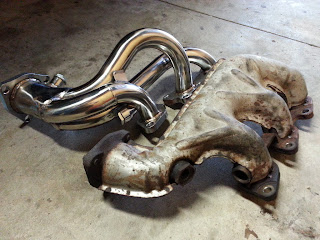 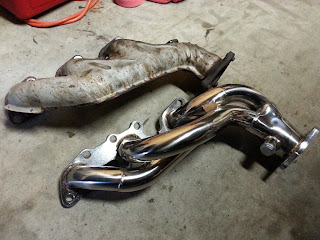 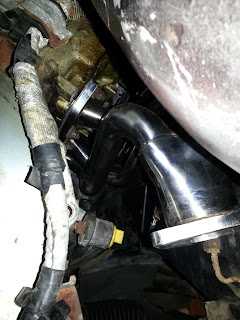 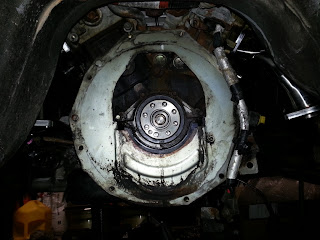 Now she's ready for the new flywheel and clutch to go on, get some 3 bolt flanges for the headers to exhaust, then drop her off at a shop for straight pipes and have a blast!

And one last thing, my car was washed again for a change!  See you guys next post! 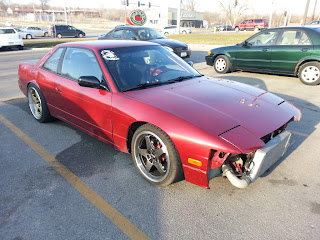