No I'm not talking about the dance move, although I must confess it's a great move.  What I am talking about is shimming an R200 VLSD.  I'm sure some of you, more like most of you, have heard of shimming a diff.  I had always heard of it but never really looked into doing it since I didn't have a vlsd, also I was always rather skeptical of this idea since I've never heard anything good about the vlsds.

Well, turns out I proved myself wrong...I guess I shouldn't say wrong since I never said it doesn't work, I just didn't think it would work as well as people claimed.

Just about a week ago Becca and I decided to try out drifting in the Z since we hadn't done it yet.  It didn't go so well, the factory diff in the non turbo is an R200 vlsd, more in particular a very incredibly worn out one.  Because of this it made doing donuts incredibly difficult to almost impossible.  The diff wouldn't lock at all so it was one legging all about the place.  This of course was a problem, there was no way Becca was going to be able to drift this thing at events and Proving Grounds (which is planned as her debut event) is only a month away.  First idea that popped in my head was put a welded diff in it, only now we had axle length issues that would need to be solved since I've never heard of anyone swapping a welded S13 diff in a Z32.  While trying to figure that out, the idea of shimming it came to mind.  I figured, "why not look this up, and see what all the hype is about".  That's when I discovered just how easy it is too do, and how incredibly cheap it is as well!

First thing first.  I needed some shims.  Which I scratched my head at for a while because there are a lot of different shim thicknesses, along with this add one or add two to make it act like a 1.5 way or 2 way.  Lot of info on it, but no hardcore definite answers that I was wanting.  I was after a 2 way, which I've also heard people refer to it as "acts the exact same as a welded diff" because it's locked all the time.  So in order to achieve that I ordered ever so slightly thicker shims then I had seen other people use.  Most threads I had seen on it people were using the .80mm thick shims, I ended up opting for the 1.01mm thick shims (I don't believe going that thick was nessisary, the .8mm thick shims will do the trick and make it easier on you to reassemble the diff as well, just a heads up for everyone.) 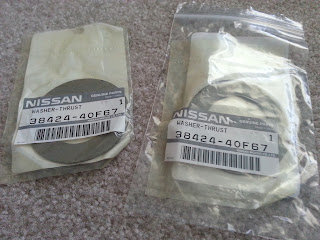 Once the shims arrived I set to work.  This I won't go too in depth with because it's very straight forward and you can look up videos on how to do this part or even figure it out on your own.  We put the Z in the garage, jacked her up, and dropped the diff. 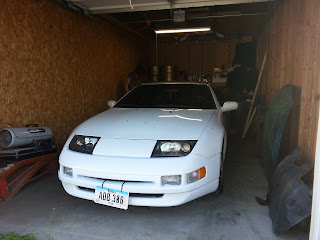 Here you can see the diff with the back cover removed. 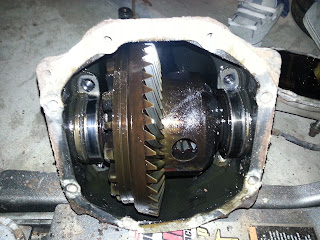 Make sure when you pull the diff out that you keep the spacers on both sides in order, they will need to go back in the exact same spots when you put it back together.

Now you'll pop the center section out, right away so you don't forget to do this put the longer half shaft back in the diff ALL THE WAY, you might have to turn it slightly to get the inside splines to line up so it'll go in all the way.  Once you've done that you'll take off the ring gear, then remove the 2 phillips head screws.  After that's done take off the vlsd cover, right away you will see where you will install the shims, from the factory there will already be a shim in place.  Leave that one there and don't remove it.  What you'll then do is add the 2 shims you ordered. 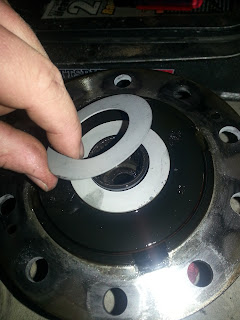 After you put those on you'll put the cover back on and you'll notice that there is now a gap between the cover and main housing, you won't put the phillips screws back on because you can't so don't waste your time trying.  Simply put your ring gear back on.  This part you will need an impact for, or super human strength.  Tightening the ring gear on will seal up the cover which in part will force the VLSD together.  Make sure you get this all the way tightened!  After that, pull the halfshaft back out, reinstall the diff into the housing along with the spacers in the same order you removed them, be careful not to damage your spacers or bearings when doing this.  It will require a small amount of force (same amount it took to get the diff out).  After that bolt it back together, put the new cover gasket on, or use RTV which is what I do and almost everyone else I know of does and put her back in the car.

My first impressions after having completed this were mind blowing.  I must say I was not prepared for how well it was going to work.  It's going to make some noise and when you turn the tires chirp like a bird in a tree.  Exactly like a welded diff.  That's right, from skeptic to believer.  I'm convinced, this is just as good as welding a diff and will cost you less given you already have a VLSD and the 5 bolt axles to match.

To really put this to the test we drove it around for a couple days, put some miles on her, then did some drifting.  The next day tried it out again and for everyone to see I brought the camera along to get some video footage.  Unfortunately blogger has been having issues finding my youtube videos lately so you'll have to click the link.

https://www.youtube.com/watch?v=M1xcp8XhVDc
Posted by Nick (Technick) DeVries at 9:58 AM