My daily driving tires on my 18's have been bald for a while now, and the other day when leaving the parts store the guys convinced me a burnout was something that needed to be done, which didn't exactly help my situation.  Fortunately I knew this day would come sooner or later so I already had some backup tires planned.  I went out to the garage, dug through some tires and pulled out my BFG G-Forces I've had hiding in the back since last year.  Whats really awesome about them is I got them for just $5 a tire! 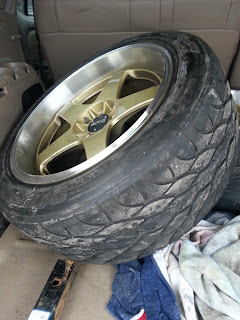 Little did I know these tires weren't going to be the great blessing I thought they would be.  I went to put them on and well...they didn't exactly fit. 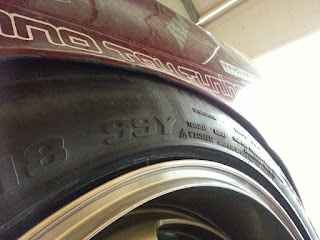 I've been running a 25mm spacer on the rear, so these not fitting didn't bother me at first.  I switched out the spacer for a smaller one I have.  Not really sure what size it is, appears to be somewhere between 15-20mm.  So I put that on and found some clearance.  Just enough to fit a card in the gap. 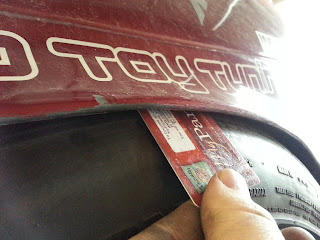 Thinking I was good to go I left the garage and drove around a little bit.  Unfortunately they rubbed, well just the one side did, my driver side had a nice mark all around the tire and the passenger side was fine with only 2 little tiny marks showing.  Looks like I'm either going to have to ditch the spacer when I've got these on or pull the fender some more.  I'm thinking ditch the spacer, although when I first ran these wheels without a spacer the tires rubbed on the inside by the coilovers and cut grooves in the tires.  However I was running -3 degrees of camber when I did that and now I'm only running -0.5 so I think it should be fine.  If not I think it'll be hammer vs quarter panel to get that extra bit of pull.

Aside from this easy to resolve tire issue, I have run into a real problem that I for some reason cannot escape, and when I bought the car I remember the previous owner telling me about this rear diff nightmare he experienced through the entire time he owned it.  Apparently this is a curse and not just a nightmare like he said.  Even after replacing the retainer clip inside the diff my passenger side shaft has decided to yet again pop out of the diff.  I've lost count how many times this has happened now.  Full of frustration I've decided it's about time I took this to an extreme.  For now since I'm basically broke I ordered a new side shaft (fingers crossed this will resolve it) and as for my extreme solution I'm going to be picking up a new stock diff from my friend Rob.  My plans are to weld the diff I pickup from him and keep it by my side ready to go in the car if this new side shaft pops out again.  Also I'm going to start saving up for a Kaaz 1.5 LSD.  This S15 HLSD just isn't cutting it. 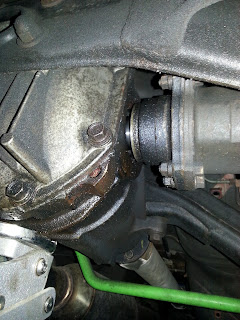 I"m starting to get the feeling the car is intentionally causing problems with itself so I'll throw it on the jack stands and really buckle down with putting my new parts on.  I think it's won my attention, I'll have the new brakes replaced on my Sequoia tonight then going to put Igna under the knife with hopes of having it back on the road before Proving Grounds on June 21st-23rd.  Fingers crossed!
Posted by Nick (Technick) DeVries at 1:27 PM