Yesterday my brake parts arrived for the Sequoia.  Just last week I replaced the front and yesterday I did the rear.  Normally I wouldn't share something so boring, especially for my tow vehicle, except this wasn't your normal boring brake job.  A rather strange discovery was made.

Now I knew my brakes were getting low based off the metal grinding noise that was continuously getting worse and more and more creepy, I just didn't realize they were getting this low.  After removing the driverside caliper I made a discovery, one of the brake pads had gone missing.  Just wasn't there, all that remained was a mangled up bit of metal that you stick on the back off the pad to reduce brake noise. 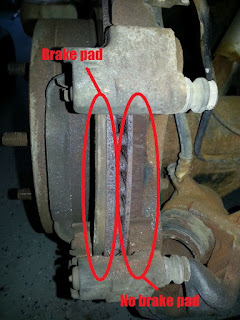 This had me confused as hell.  Obviously there was a pad there at one time based off the piece you stick on the back, but where did it go?  It's not like it can just pop out of the caliper and there's no way it just disintegrated because it's only been grinding for about 300 miles.  I would soon find my answer, after unbolting the caliper bracket to replace my rotor I discovered some strange marks on the bracket, and when working on prying off the rotor I heard some strange metal clinging noises coming from the rotor/dust shield.  It wasn't until after I removed the rotor that I discovered what happened to the pad. 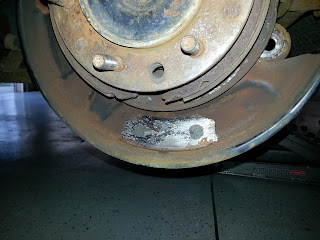 Apparently the pad and the rotor had worn down so much that the pad was able to slip in between the rotor and caliper bracket, then it was caught by the dust pan.  Thank God, this didn't end up destroying my caliper.  The piston which was all the way pushed out hadn't come in contact with the rotor ever so I didn't have to replace that.

Here's a closer look at the worn down pad and how nasty this rotor was when I pull it off and got a good look at the backside. 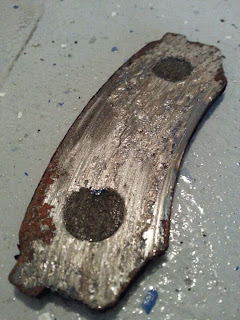 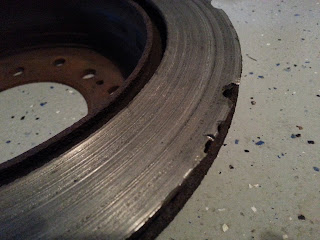 After making sure everything else checked out I went ahead and slapped the new rotor on. 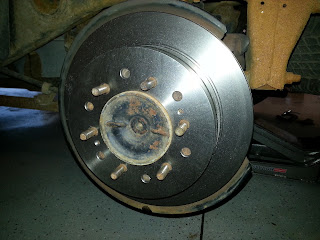 Then of course the new pads, and reassembled everything.  Finally my brakes are fixed.  Now I can comfortably put the 240 up on jack stands and begin some major work on her.  Thinking I might start on this sound detaining removal.
Posted by Nick (Technick) DeVries at 2:37 PM