Time to start getting caught up with my blog.  I've fallen behind on my updates a bit and it's not because I've been being lazy like normal, this time it's because I've actually been too busy to do anything.  These last few weeks have been a non stop rush trying to get ready for Proving Grounds 2013.2 and now that the event is over I finally have some free time.

So now that I've had some time to go through all 700 or so pictures I've taken, I'm finally ready for some updates.  Don't worry, I deleted all the double shots, out of focus, sloppy, etc.  So the final count is around 200-250, will most likely cut a few more as well.

Anyway, since I've been lacking so much lets start these late updates right!  A trip to Shiomi Garage should make for the perfect starter! 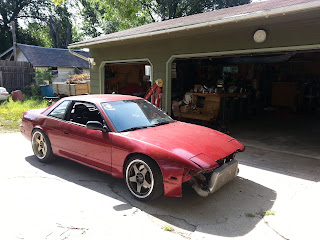 For those of you who actually read this, which I hope is everyone.  You'll remember at PG 2013.1 I had got a little over excited and tagged a wall.  What appeared to just be a little scuff and a slight dent turned out to be a damaged trunk as well.  After spending a good 10 min climbing through my monkey cage and working in the darkness of my trunk I was able to get it open.  Then it wouldn't shut, I tried adjusting the latch every which way and slamming the living shit out of the trunk, but nothing worked.

That's when I remembered I had a set of Aerocatch locking hood pins that I have yet to install, initially these were going to be used on my hood but now that I had the trunk issue I decided to use them on the trunk instead.  This meant a trip up to Shiomi Garage because I really didn't want to be the one cutting the holes out for them.

Immediately upon arrival I had to look over the progress made on the Sil80. 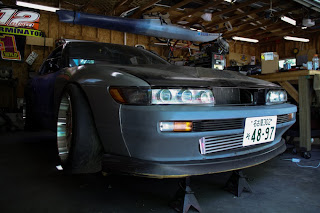 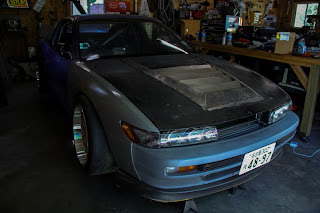 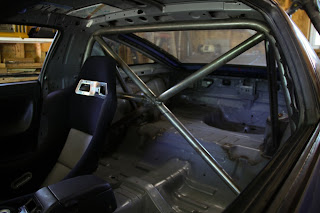 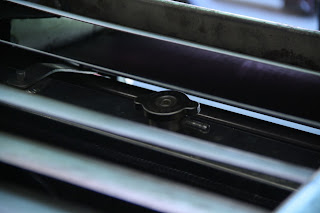 She was really coming along nicely I mus say!  What was really cool is since we didn't have a whole lot of work to do on my car we decided to put her down on all 4 and push her outside! 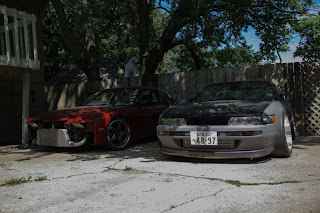 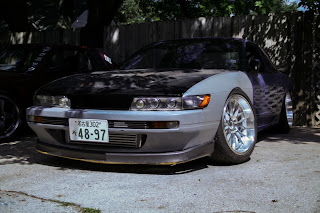 This was the first time our cars had been parked together outside which was really cool to see! So of course we spent a while just sitting there looking at them and cracked open a few beers while we were at it.

After that it was time to get to work.  First thing first, pull the ghetto tape job off my trunk that was holding it shut for the drive up there. 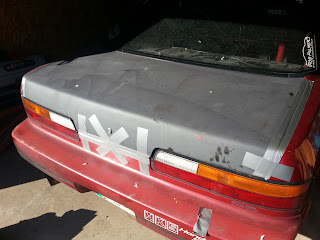 Then made some brackets for mounting the pins and it was time to mark out the trunk.  (sorry I didn't realize this until now, but I don't have a single picture of the brackets for the pins...) 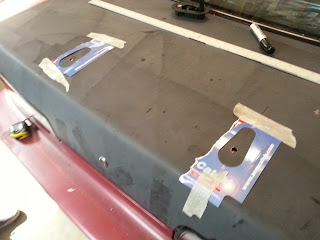 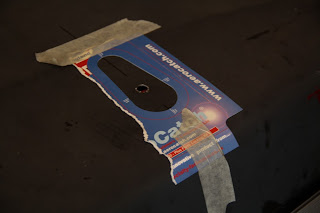 Once we had the trunk marked fort he pins it was time to cut the holes! 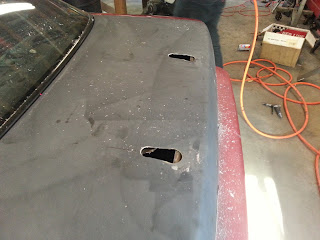 While Travis was working on that, like usual I made good use of the time to take some shots of his beautiful Sil80! 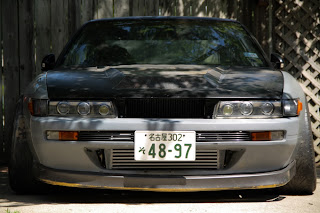 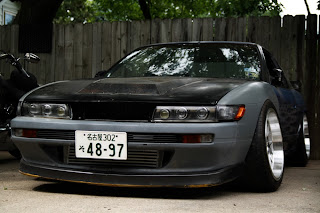 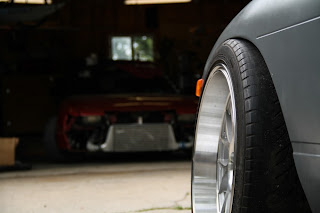 Then the last shot gave me an idea.  I had yet to get a good pic of my GKtech knuckles on the car! 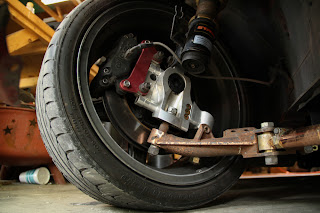 Now that my attention had be brought back to my own, I remembered I bought some new rubber bumpers for my trunk since my factory ones were dry rotted and smashed.  After all, my BCL wing was getting close to arriving at this time and I wanted to make sure I would have a good stable trunk ready for it to be mounted on! 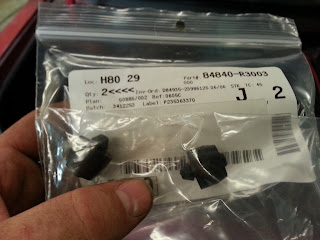 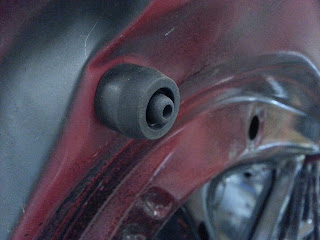 Right after that, Travis had the Aerocatch pins installed and that was it... We were pretty much done for the day and it was still sunny out! 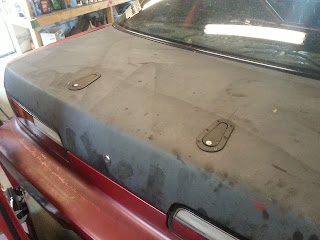 With that now being completed we ended up just hanging out, discussing random things and going over ideas Travis had in mind for the Sil80. 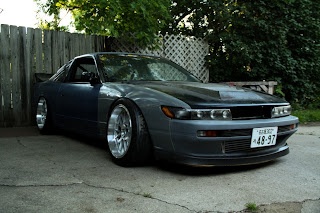 This turned out to be a really good chance to take some pics of the car.  Talking about the things I found really cool and being able to show Travis some of the shots as I took them. 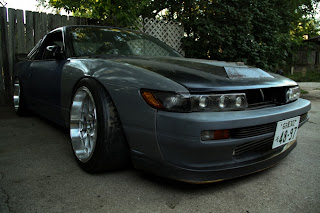 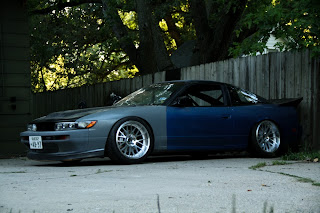 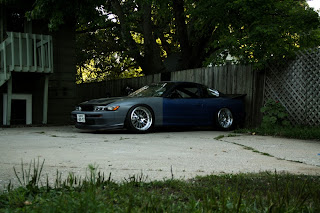 I just love the way these Square Wheels look on the car!  I liked them so much I found myself having a little bit of fun with a picture or two. 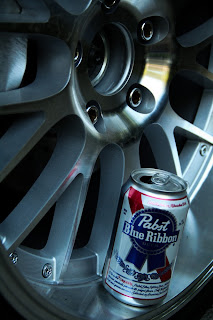 The craziest thing about the wheels is the clearance between the caliper and the spokes.  In order for them to fit he had to shave some material off his calipers! 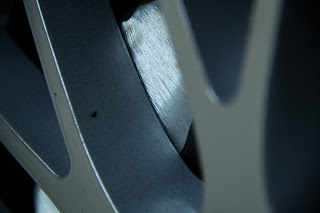 Then there's the wing on the car, something he's working on making himself.  I absolutely love it, not just that he's doing his own custom shit, but his styling is incredible! 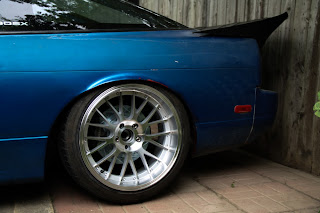 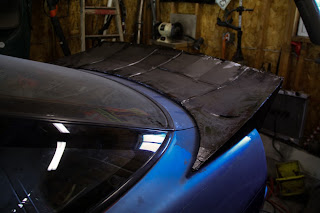 I seriously can't wait to see this car tearing up the streets!

Now back to work, yeah that's right...after standing around having fun and snatching up some food to eat I had remembered about the AE86 diff a friend gave me to have Travis weld up for him. 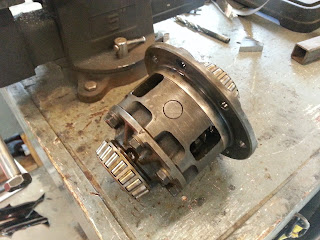 This proved to be rather interesting as it's not exactly open like the R200's are. 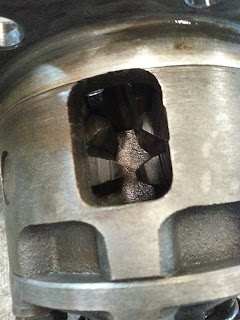 Luckily you can still get to the spider gears, and we had the perfect solution for welding this up.  Fill up the holes so the gears can't mesh and weld the gears to the outer casing! 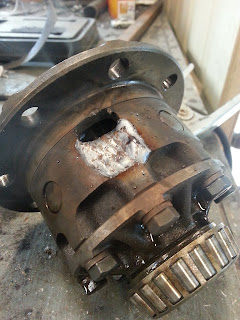 From what I've read on the 86 forums this is how people have welded them and it works out perfectly!

Then it was back to beer drinking and hanging out.  We sat around some more talking about some ideas I had in mind for my car.  Talked some more about the Sil80.  Then I spent some time working on sobering up because it was starting to get dark and I would eventually need to head home.

It was an awesome trip like always and I can't wait for the next one.  Oh wait, that's right, I've been up there again since this visit sot that means there's another one coming your way! 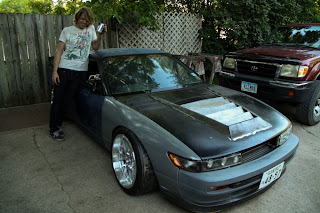 Until the next one, cheers mate!
Posted by Nick (Technick) DeVries at 11:28 AM