Updates On The Simulator

Finally got around to making some upgrades on the simulator setup.  Super happy with it working again got me motivated to get back to work on finishing what I had started.  Time to stop sitting around and work on the seating.  With a quick trip to the hardware store to buy some 2x4 and bolts I was all set to get to work.

First thing first, had to figure out how exactly I was going to make the legs for the seat.  Took a little bit of thinking but after a good 15 minutes of taking measurements and doing 3 different drawings I had come up with the solution. 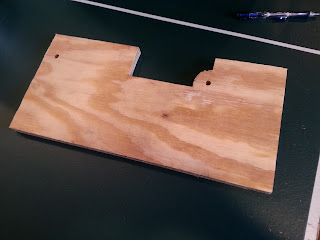 After I had that cut out it was time to test fit and cut out a second one for the other side which didn't take much time at all. 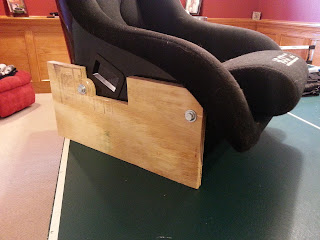 It worked out better then I had expected and fit perfect without needing to make any other modifications.  Up next was to make some legs which would set it at the proper height. 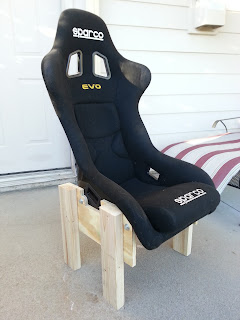 I started off by making the legs 1.5" shorter then I want the seat to sit.  Reason for this is I still needed to add some 2x4 to the bottom of the legs as those will be the full width of the framing and be what the bottom of the seat fixes to when finished.

But before adding those I needed to make sure the seat was where I wanted it and not too high or too low. 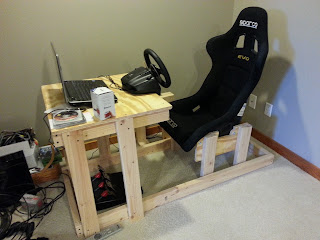 My cat Tigger agreed, it was perfect. 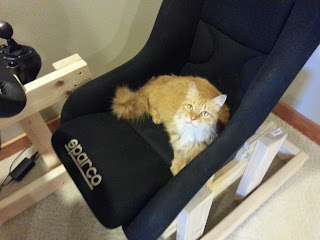 After I had that set I didn't waste any time to try it out.  It felt sooooo much better sitting in an actual seat instead of a chair meant for a kitchen table.  This had me rather happy and excited, so much I felt motivated to do some more work to the setup.

So I went online and purchased a proper steering wheel... Well if you consider a $45 350mm deep dished suede wheel off ebay proper that is.

Once that arrived I went out and purchased some suede cleaner, protector, and a brush.  My sparco wheel in my car has been destroyed thanks to getting dirty and not taken care of properly.  I wasn't about to make that mistake again even with a wheel as cheap as this one.  I would really like to have this last. 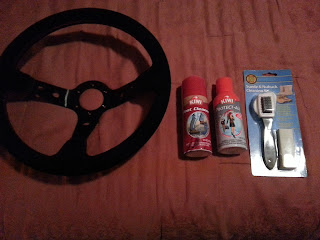 Then before I could even put it on I was told I would still need to buy an adapter.  Even though the force feeback wheel I have is a 6 bolt pattern it's not the same size as an actual cars 6 bolt.

After another week of waiting the adapter had arrived. 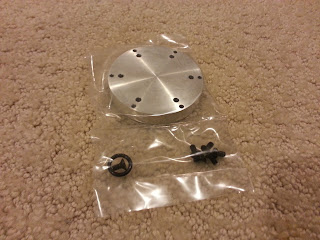 Time to put it on!

Quickly popped the old wheel off. 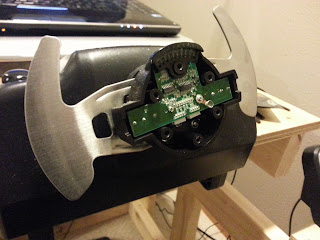 Then placed the O ring on over the shift light portion to prevent that from rattling and put the adapter plate on. 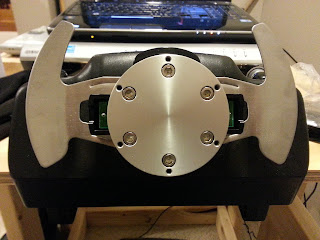 Then of course before putting the new wheel on I had to take a quick comparison photo of the two steering wheels.  What a difference!  The stock one being only 270mm and the new one being 350mm.  Another nice difference is the new one doesn't have the "bumps" at 10 and 2 on the wheel which always find a way to catch your thumb and mess you up. 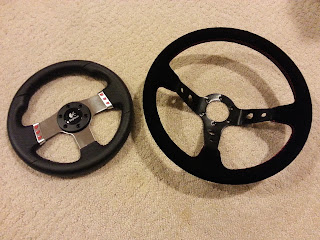 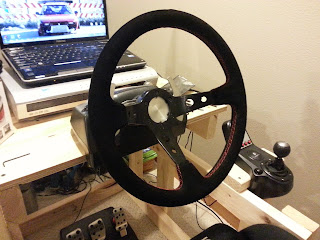 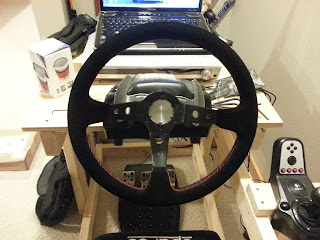 All set, time to test it out! 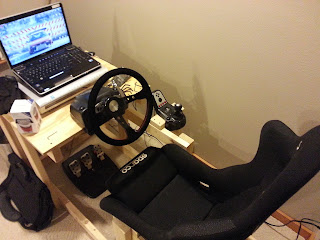 Now I had been warned the force feedback wouldn't be as strong after doing this.  People say the weight difference causes it to be weaker, but actually when I held the new wheel and the old wheel at the same time the old one felt just as heavy if not more!  The real thing that causes a big difference is the size of the wheel.  Now with it being so much bigger you've got a ton more leverage making it easy to turn the wheel.  Easy solution to that though, just turned up the force feedback strength in my settings and it felt just as good as it always did, actually it felt better!  I've got a proper wheel now!

Next up, getting triple monitors.  I'm thinking 3 large displays should make for a really nice view.  Wish I still had my old TV for now at least, oh well, the laptop does just fine for now.

Also for anyone curious on what all I have for the setup so far.  I'm using a Logitech G27 wheel/pedal/shifter combo.  Ebay 350mm suede dished steering wheel with a Chili Coke adapter.  Sparco Evo seat (yes a real one, I bought it used for dirt cheap otherwise I would have just bought a replica).  The framing and table are all custom done just using wood.  I would like to point out this is still in a "prototype" phase.  Once I get everything situated with all the modifications and screens I plan on making a new frame out of steal that will be capable of being quickly dis assembled and re assembled because this one is too big to fit through a door.  Lastly for the "game" I use Live For Speed on PC, right now I'm using the newest S2 6E version in conjunction with Pro Tweak v1.5 for being able to modify the cars HP, stance, steering lock, and tire heating/cooling hack.  Plus I also have an S13 Silvia skin installed for the car.

Here are some links for anyone interested in getting their own setup:
Live For Speed Download - http://www.lfs.net/
6E Pro Tweak v1.5 - http://www.lfs-tweak.com/2013/03/LFS-0.6E-Pro-Tweak.html
Chili Coke products - http://chilicoke.com/logitechwheel.htm

As for everything else I bought my Logitech G27 on ebay, the steering wheel on ebay, and the seat locally.  You can use whatever site you want for yours if you go that route.  If you're not much of a handyman or don't want to build your own frame/cockpit like I did there are several different companies that make some you can buy.  Just google search "playseat" or "simulator cockpit" and you'll find all sorts of different ones like this for example.

Or maybe you're loaded and want to add some g force simulation to yours.  You can get a hydraulic controlled seat too! (not sure if it works with Live For Speed, but I do know it works with iRacing *iRacing isn't exactly drift friendly) Either way, just make sure to have fun with whatever you do.  Plenty of people I know don't even use a seat, they just have a computer desk, computer chair, and the one monitor their computer has.

I would also like to point out there are TONS of different wheel/pedal/shifter combos out there.  I would highly recommend the Logitech G27 or G25.  They are in my opinion and many others opinions the best bang for the buck.  If you for some reason want a better or different wheel they are out there just make sure you get one that offers up to 900 degrees of rotation or more!

Until next time, thanks for reading!
Posted by Nick (Technick) DeVries at 8:26 AM