With all the news coming out about some of the arms breaking I think it's time I started to take things a bit more seriously.  Apparently the "extreme" arms are having binding issues and breaking under bind and the Zero Ackerman arms mounted reversed are also having issues with binding and breaking.  Luckily for me with my combination of my PBM rack eccentric spacers and my SPL high misalignment outer tie rods, I'm not having any binding or over centering issues.  This basically puts mine out of risk of breaking, however since I'm not a fan of running something in a way that it has broken for others I've decided it's finally time I worked on making my own custom arms. 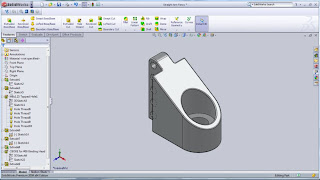 Currently I'm still in the prototype phase, right now I've got a local machine shop working on machining up the first one I will try.  I'm super excited to get it back so I can do some testing with it.  If all goes well I plan on having a finalized arm made and ready within the next 2 months.

As for some info on the design, I've slightly shortened the arm compared to the Zero Ackerman, actually they are even a few mm shorter then the Extremes as well.  I've also located the arm in a position which should put it at a very very slight amount of ackerman rather then zero.  I'm also thinking about making a second set of arms with more ackerman to be used on short tight tracks, but for now I'll just be focusing on the first set.
Posted by Nick (Technick) DeVries at 8:28 AM 2 comments: 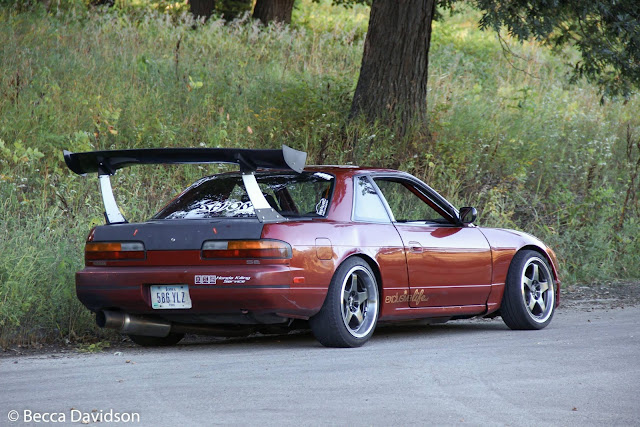 Posted by Nick (Technick) DeVries at 1:17 PM No comments:

After having made a trip to Shiomi Garage and getting the handbrake mounted in place all we had left to do is run the brake lines and bleed the system.  Didn't take too long to do, the hardest part was figuring out how to run the lines which turned out rather nicely.  Ran them through the hole where the oem cables went then up through the trans tunnel eventually going into the master cylinder. 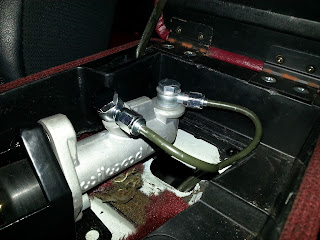 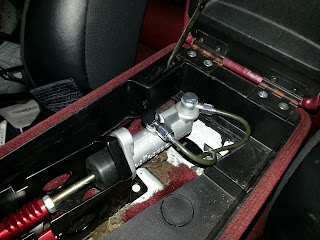 With the lid of the arm rest being so close to the handbrake I had to figure up a different way to connect the lines then what I had done in my 240... Man I wish I would have used banjo bolts like we did on the Z32.  They worked out great, and the only issue that we had is one of them needed trimmed down a little. 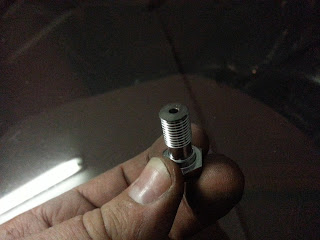 The other thing we took care of were getting some tires early in the week and then had them mounted during my lunch break.  Initially I wanted to have her try out the Achillies ATR Sports, but unfortunately the place we ordered them through were out of stock and said the tires are on back order for several weeks.  So instead I decided to have her try out some cheap no name tires.  Delinte Thunder D7, which were super cheap and looked to be rather promising. 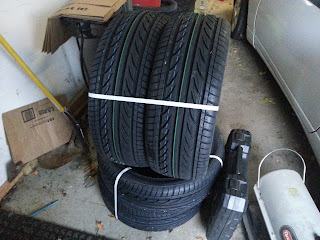 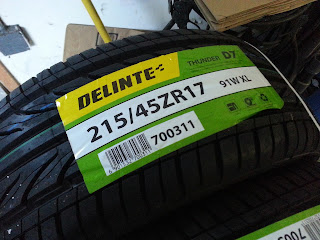 Once everything was all taken care of with the car it was time to pack up and ready ourselves for DD46! 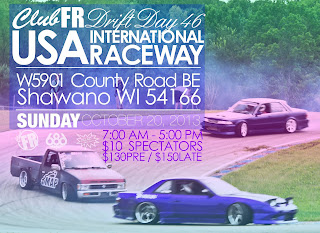 Saturday morning the day before the event we loaded up the car, made sure our bags were packed, and the tools were with us.  Then it was off to Shawano, WI! 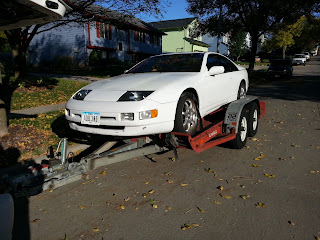 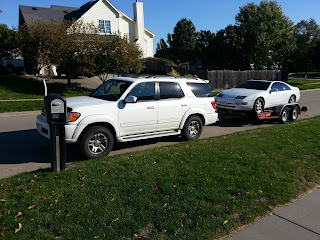 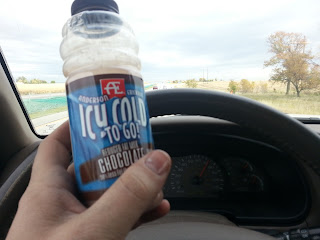 Since I was sitting this event out we were able to ride together to an event for a change. It was really nice having someone keep me company for the drive up, made the time go by a lot faster.  Becca was also super happy about this, no driving for her, just a nice relaxing car ride. 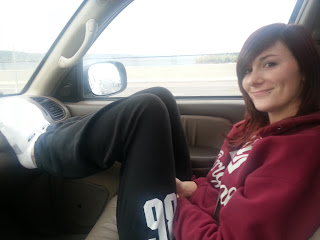 My favorite thing about this event is that it's held on a Sunday.  This meant I have a whole day to drive up there which meant all day time driving and plenty of time to stop for food rather then eating in the car.  Of course since we don't have an A&W in Des Moines, I always make sure to stop at one. 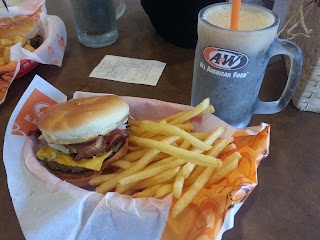 This would be the farthest trip we've made for a drift event so far, usually I fill up when leaving, stop once for food and gas, then we're there.  This time I had to stop twice, and the second stop I wasn't very fond of.  Running on fumes I had no choice but to stop at a small town station, had a ton of people give us dirty looks and I swear they thought the 300zx was some sort of alien space ship.  Heck they had a horse carriage parking spot which had obviously been used recently... 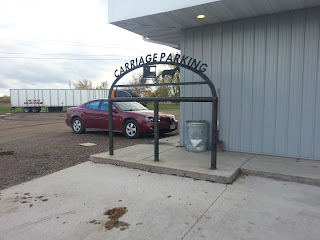 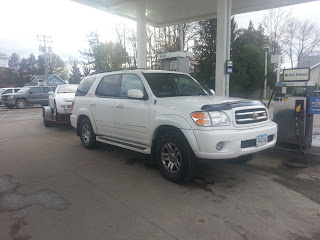 All finished up and we made it to our hotel just as it was getting dark.  Time to get the electronics charged up, one of them being some new walkie talkies I picked up so we would be able to talk to each other while I was watching from the side lines. 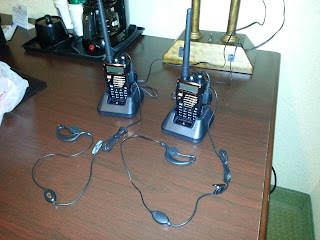 The morning of the event was super foggy, could hardly see anything on the way there.  Even some random lady pulled up beside me to bitch about how she almost rear ended me because she couldn't see, and it was somehow my fault?

Really cold out we got registration taken care of and unloaded the car.  Thankfully by the time the drivers meeting started the fog had cleared, although it was still cold...I think the high that day was showing 34 degrees.

With having new tires and not having driven the car in a while she decided to warm up a bit at the donut pit.  Right away it was obvious she would be fighting understeer issues the whole day.  The car kept wanting to push like crazy, although once sideways everything was fine.  (Sorry for not having pics up to this point, I was really trying to focus on getting her ready for the track)

The morning went by rather well, she had the layout down immediately but with the car continuously wanting to push it made the second corner difficult. Something to work on and keep in mind for the future.  This being an issue that she hasn't had up until now pointed at the tires being what the problem was.  Apparently these no namers had a lot more grip to them then I had expected. 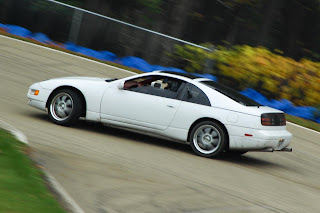 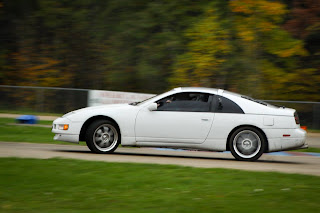 Lap after lap she kept fighting understeer problems, I had the idea of removing her front sway bar to help fight it but since it was so cold and it was almost already noon I decided it best she keep doing laps and be forced to learn how to overcome them by initiating differently. 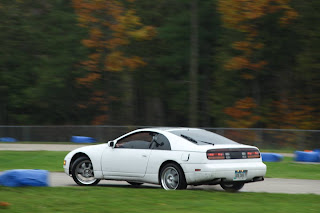 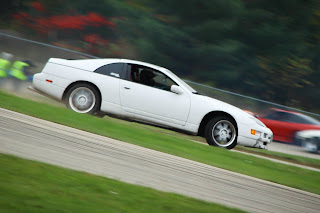 She figured out a really aggressive clutch kick solved the problem of understeering but lead to the issue of the car kicking too hard and spinning... I remember she would come back from every lap talking over the radio about how disappointed in herself she was, and her biggest worry was that she thought she was embarrassing herself.  During lunch break we talked about it and re assured her that nobody was out there making fun of her.  Everyone I met and spoke with that day were super friendly people and were having a blast.

After filling up on some food it was time to hit the course again, and after a hot minute it began to rain.  This had my hopes up for her since every event she's been at it's always rained towards the end of it and she's always done better in the rain. 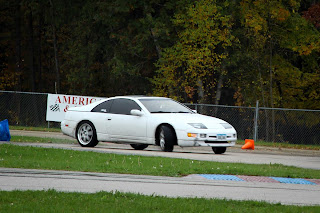 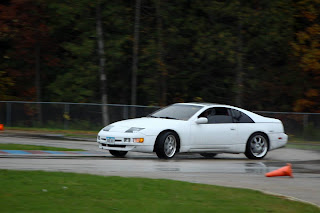 She improved like I thought but still found herself understeering like crazy going into turn two.  There was just no beating it, but that's okay.  It gave us something to learn from, come next event if she's still rocking the 300zx some changes will need to be made.  I'm thinking about looking into a better front tire and adding a stiffer rear sway bar.  I think that should solve it, and if not we'll give removing the front sway bar a try.

The day ended a little early which I think everyone was okay with.  I know I was, standing in the rain when it's hardly above freezing gets real old real fast.

It was a killer fun event to go to and a big thanks goes out to Club FR for hosting it.  I can't wait for the next one, hopefully I'll have my car with me next time.  Until then, gonna keep working on the cars and continue focusing on getting better.
Posted by Nick (Technick) DeVries at 12:08 PM No comments: