Let me just start off with this.  I made a big mistake with these and overlooked a very important factor when it comes to steering.  I'm still learning a lot as I go and I find experimenting and learning from experience works better for me to learn and understand things rather than simply reading about it.  I've come across all sorts of miss leading things while researching that it's gotten to a point where I question a lot of what's out there.  There are a countless number of subjects I've come across where one group of people will say it works one way and another will say it works in an almost opposite manner.  This project in particular is one of those where I had a lot of confusion going on in my head and lacked a lot of understanding on the subject, however now that I've gotten some experience working with it I've been able to learn where I went wrong and what's right.

Now let's get started!  Since there isn't really much to explain when it comes to putting these on (4 bolts for the coilover to plate and 4 bolts for the plates to strut tower) I'll just post some pics of the parts and some comparison photos. 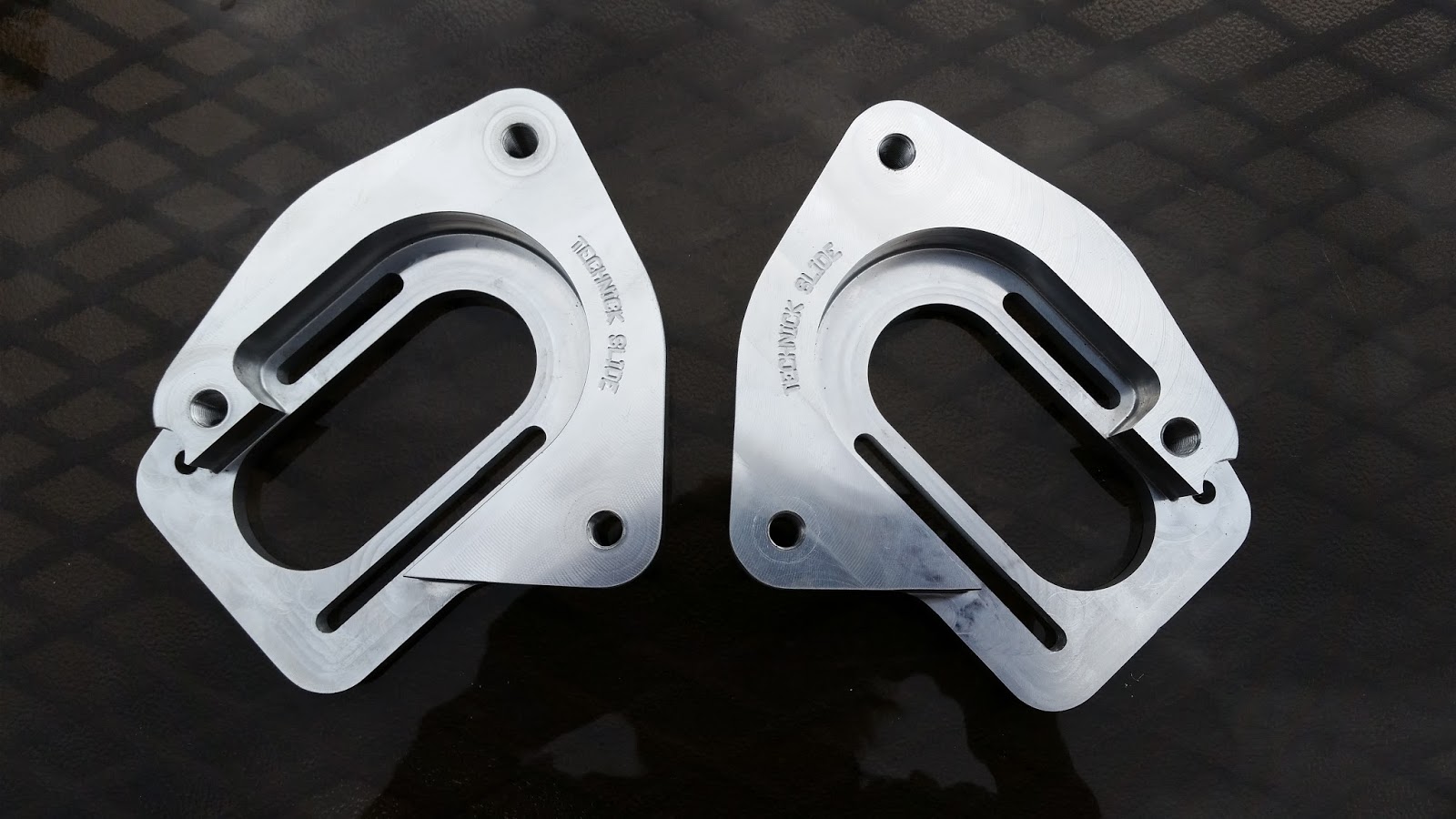 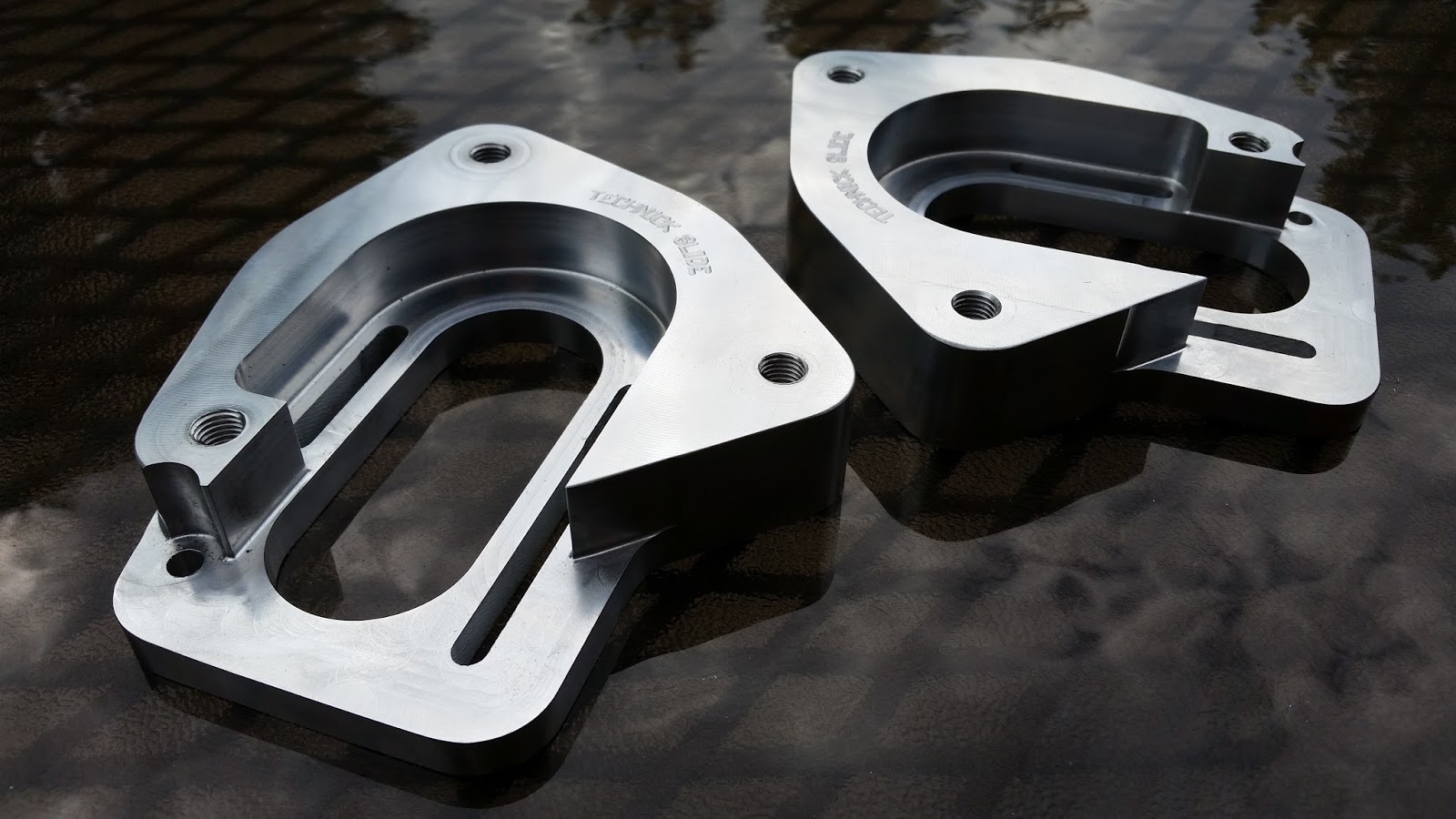 Comparison photos of the Technick Slide vs the Stance USA camber plates. 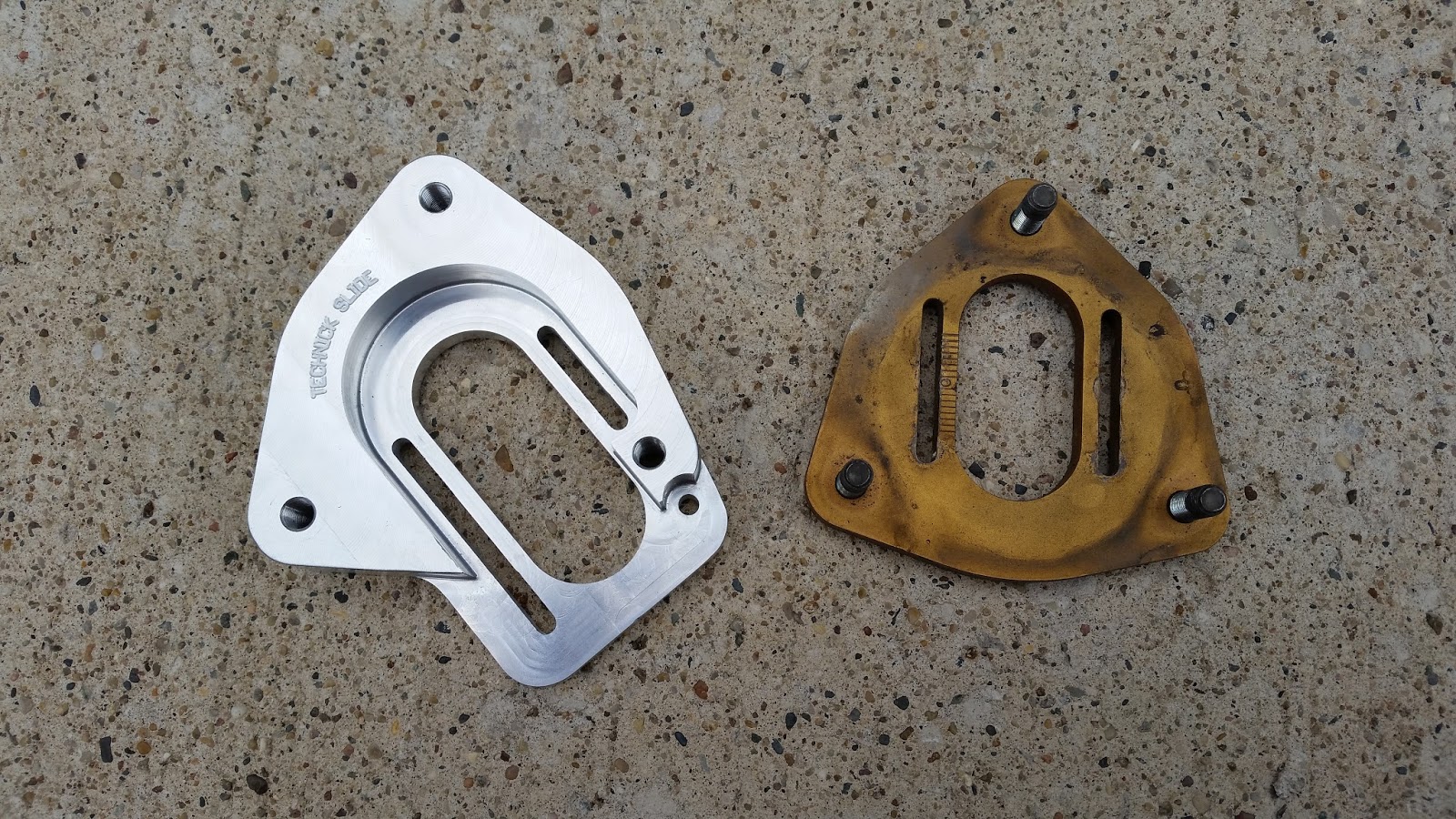 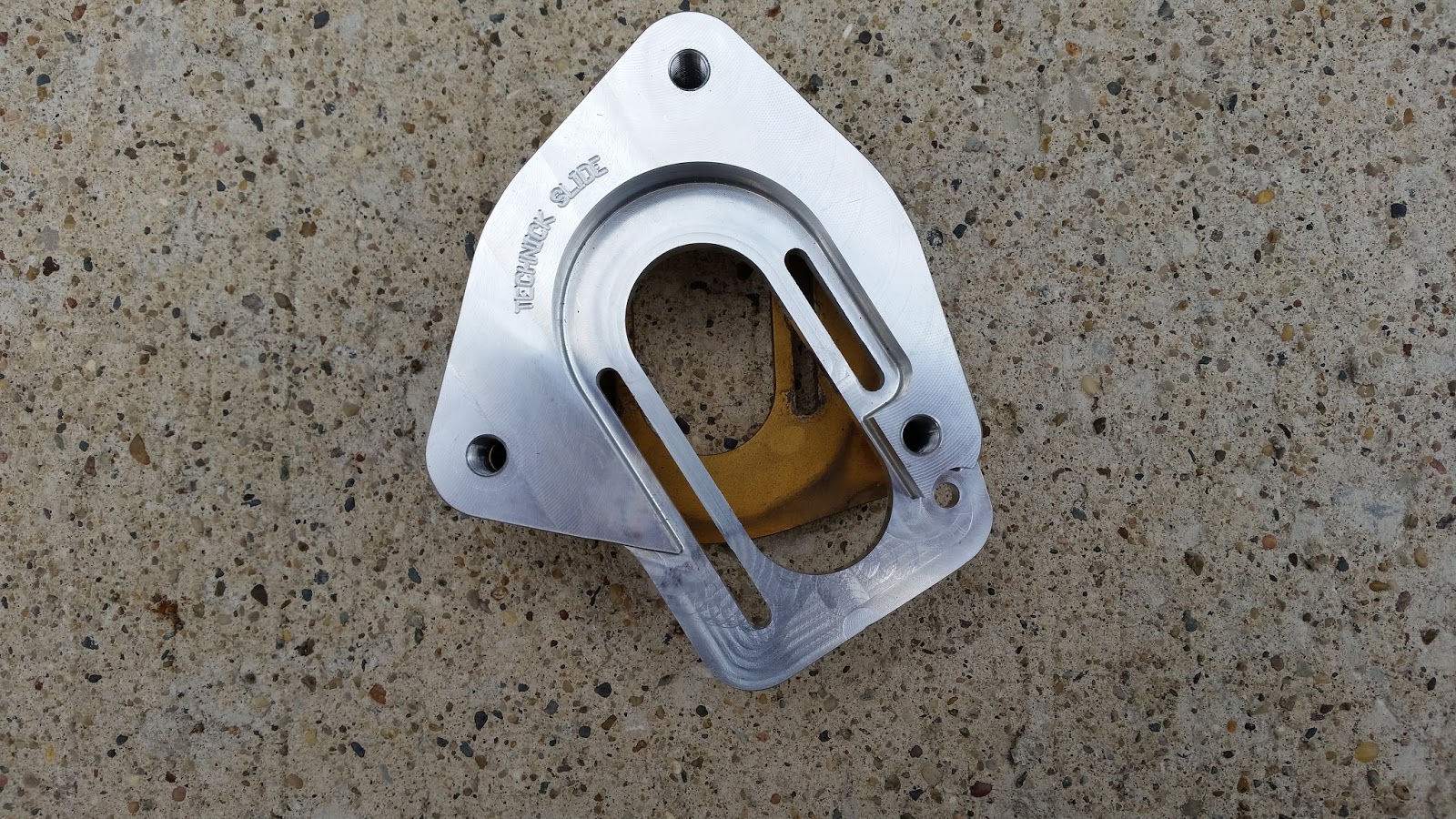 Lastly two quick comparison photos of them installed.  Ignore that they are on opposite sides of the car, I flipped one of the images to make it look like the same tower so just use your imagination and pretend these are on the same one. 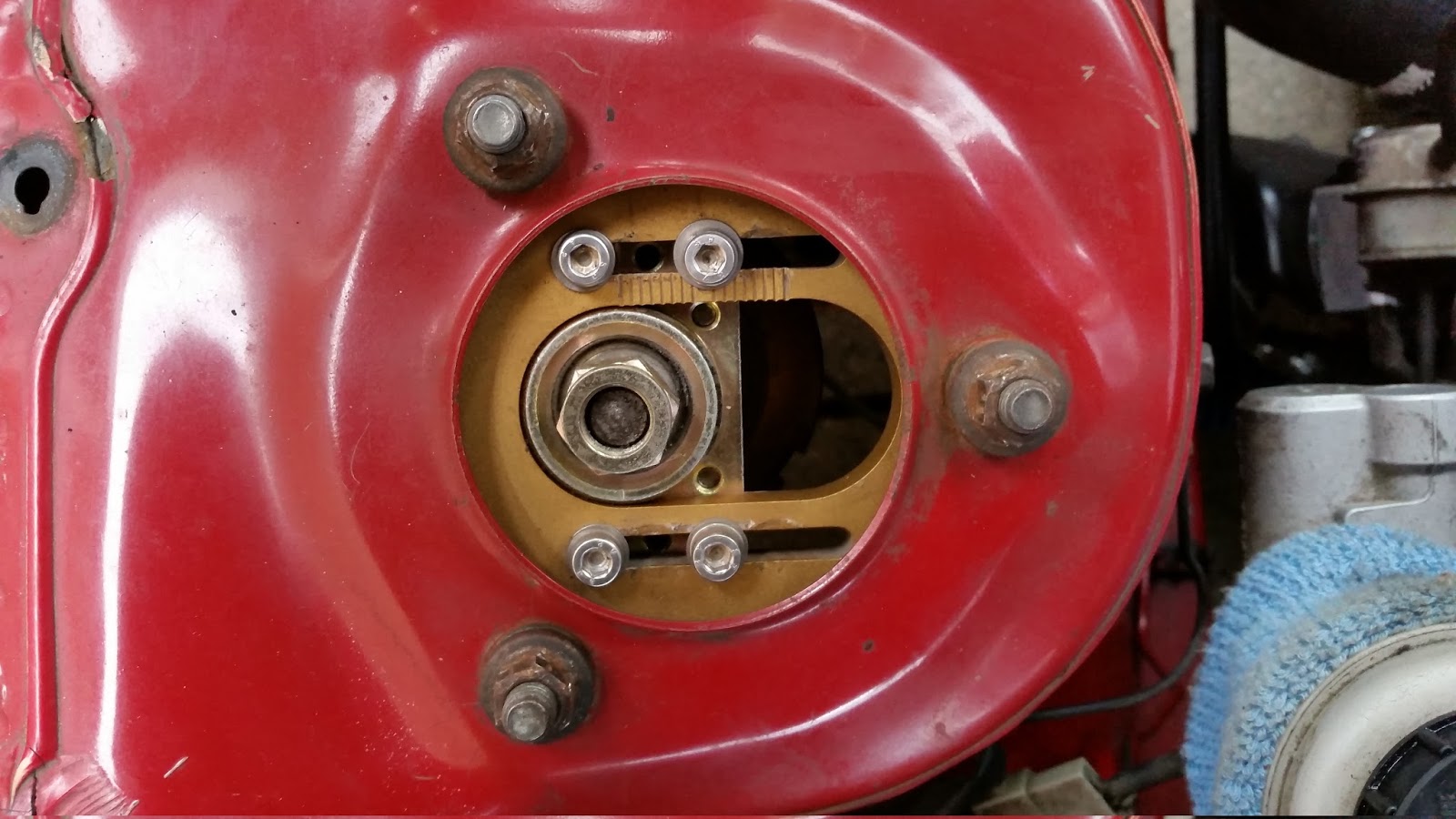 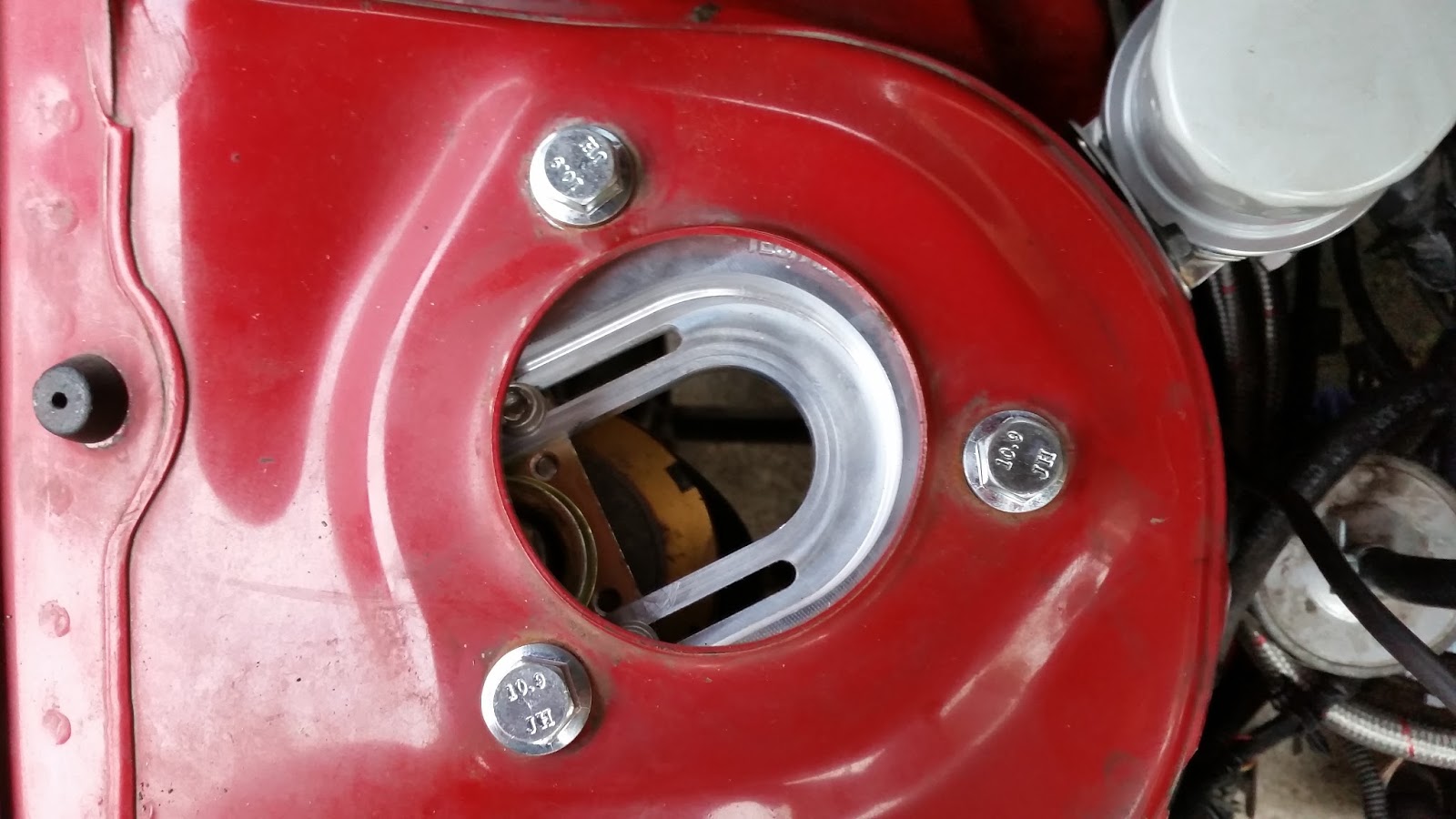 Here's a shot showing the clearance of the strut nut and the shock tower. 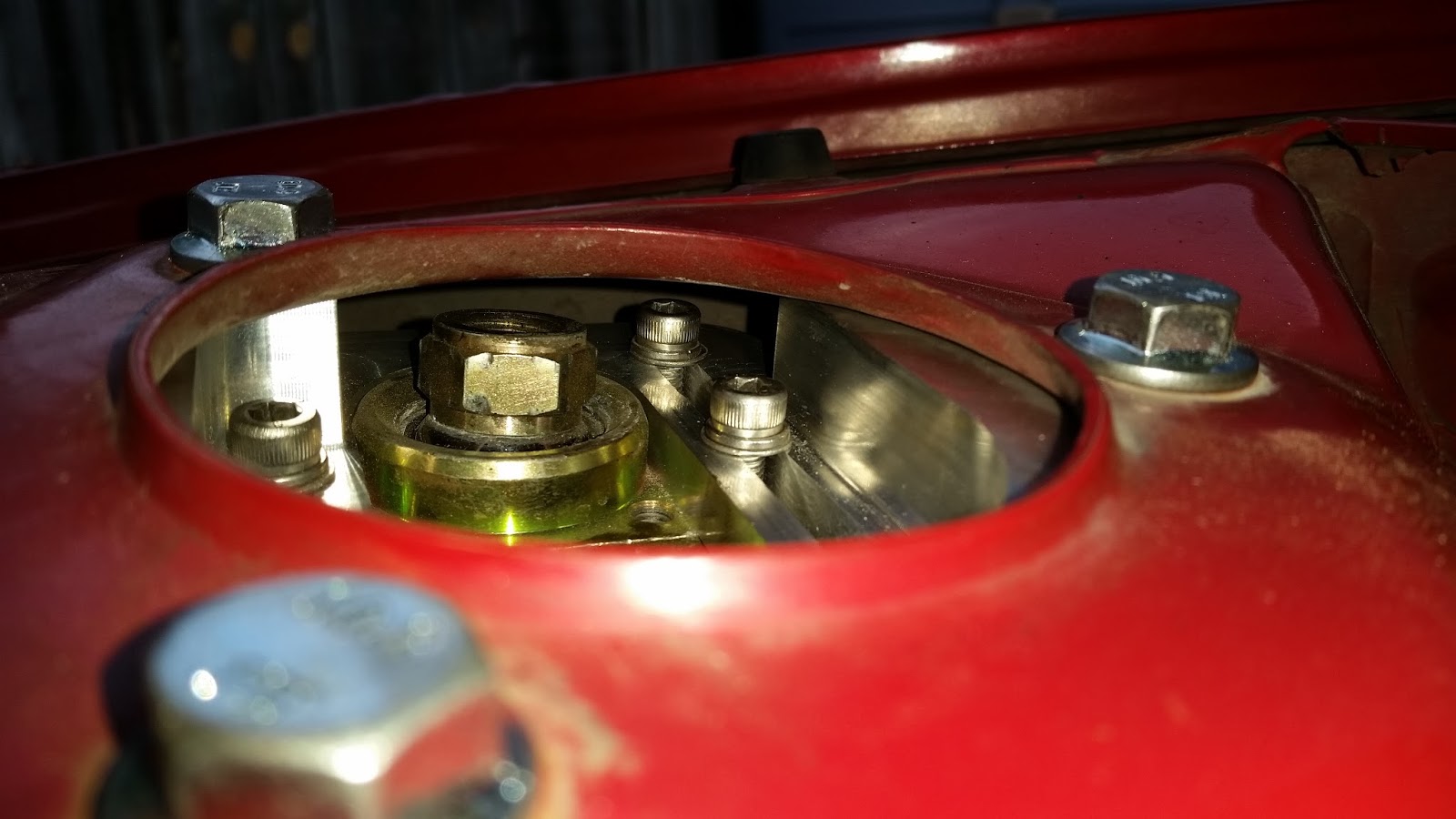 Lastly a quick shot from underneath. 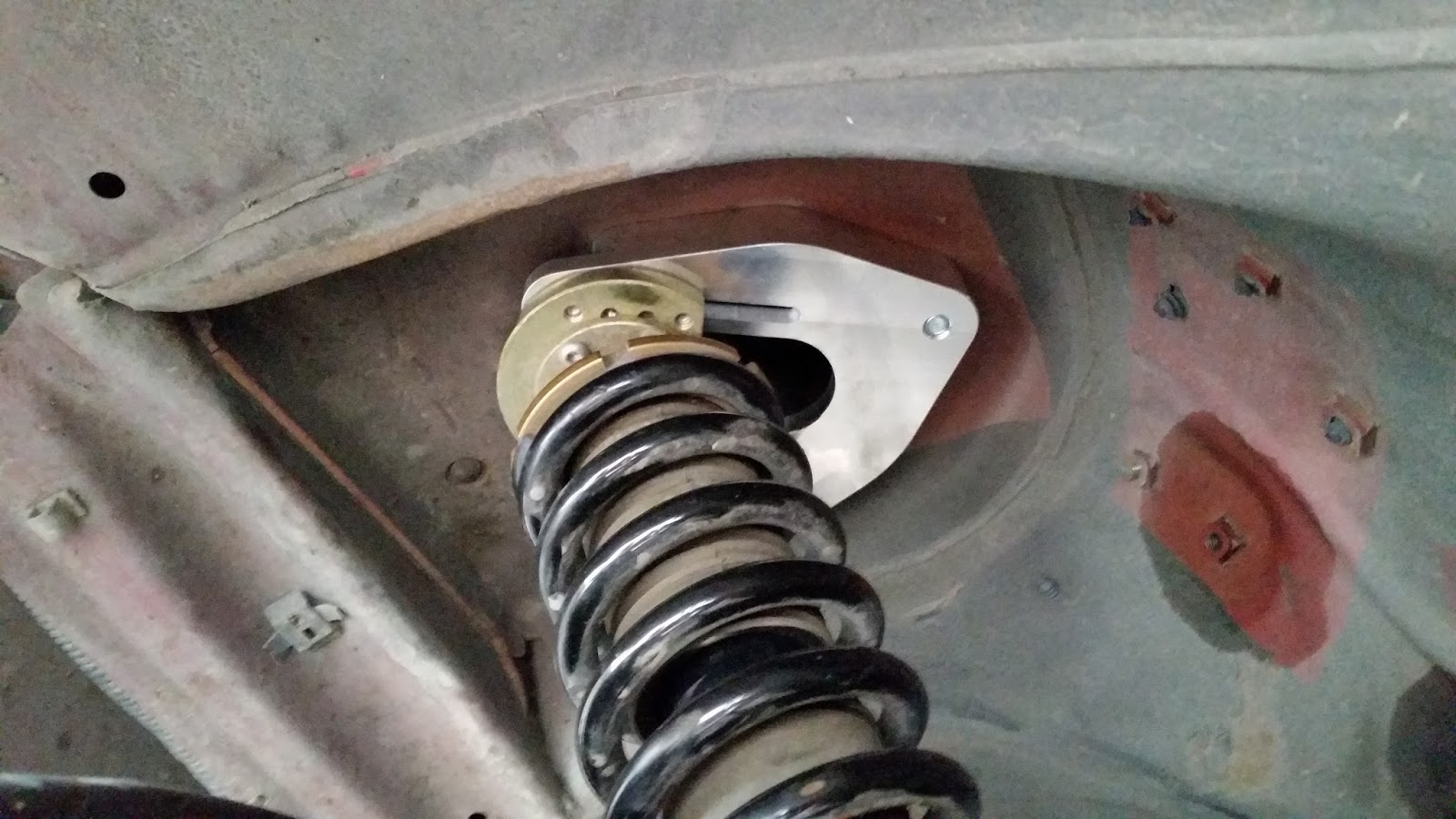 Now that those are out of the way let's go over everything I did.

Obviously installed the plates, then did a quick alignment.  After that was all done I checked to see where I was set.  Static camber changed from -5.9 degrees down to just -2.4.  So far so good, checked lead wheel camber which changed from +12.6 degrees to +6.7.  I had done trailing measurements but somehow lost those between then and now so unfortunately I'm not sure what they were.

This was a big change but there was room for much more, I was able to shorten my LCA up some as well as pull my LCA caster back a touch, and lastly change my knuckles camber adjustment from 0 degrees to -4 (gktech knuckles have camber adjustment built into them which allowed me to be able to do this).

The final results came out to almost dead on flat for both lead and trailing.  If I recall correctly my lead wheel came in at only a half degree of positive camber at full lock  Static camber was right around -4.

Here's a quick before/after of the lead wheel.  Pleas ignore that they are from opposite sides of the car, I wasn't thinking about it when I took pics. 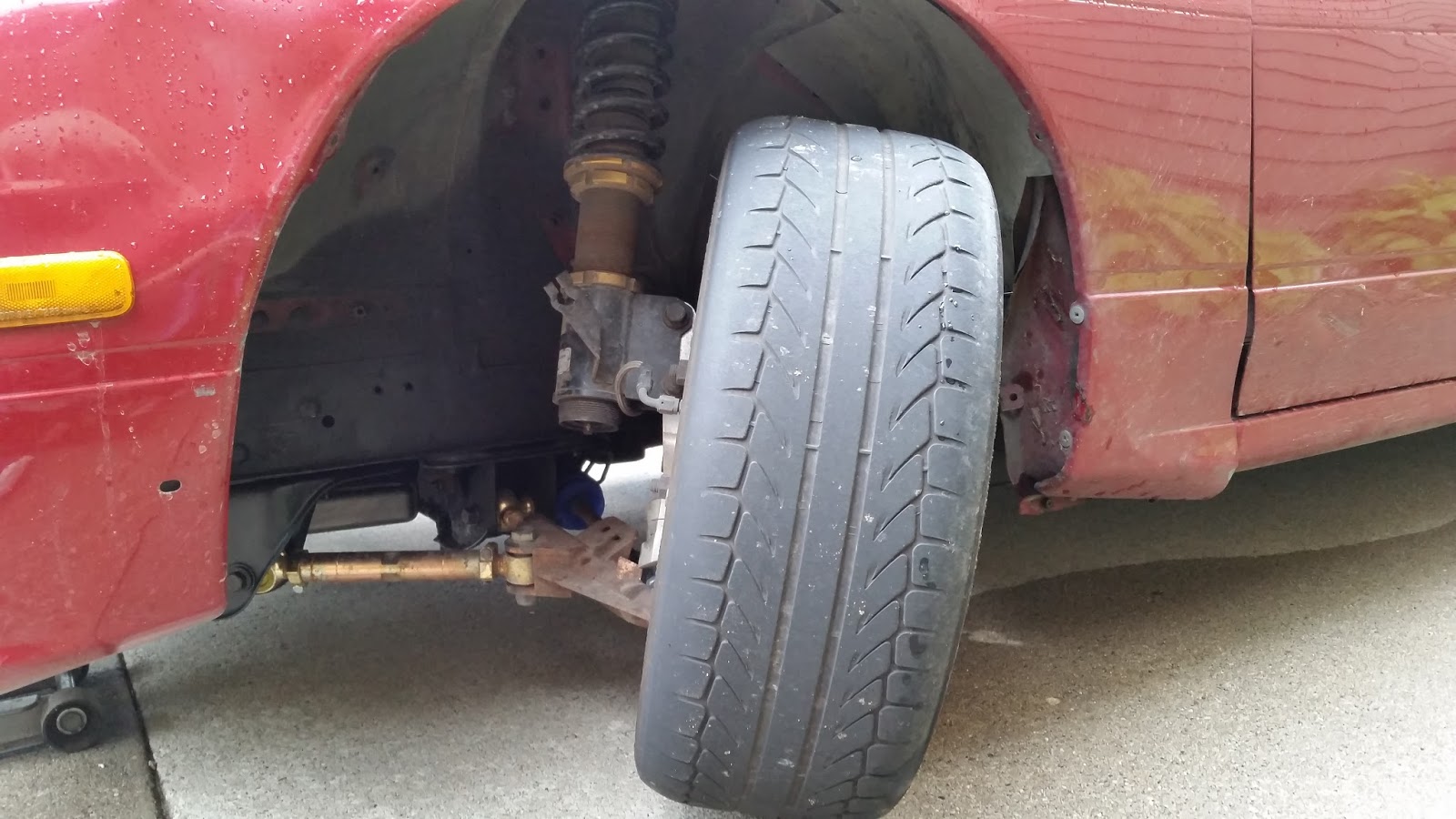 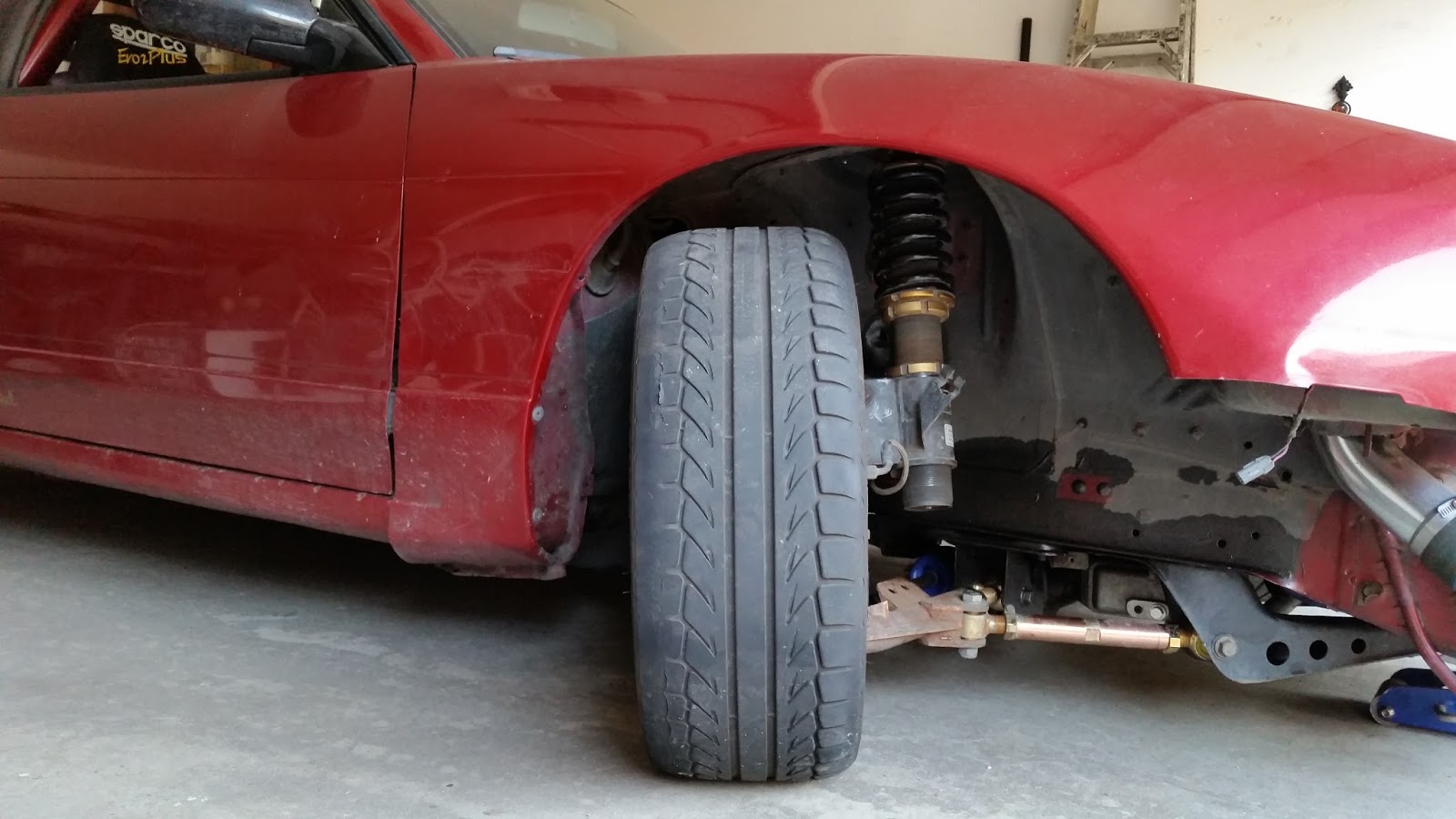 Also a picture of the trailing wheels camber.  I don't have a before photo for this one so all I have is the final. 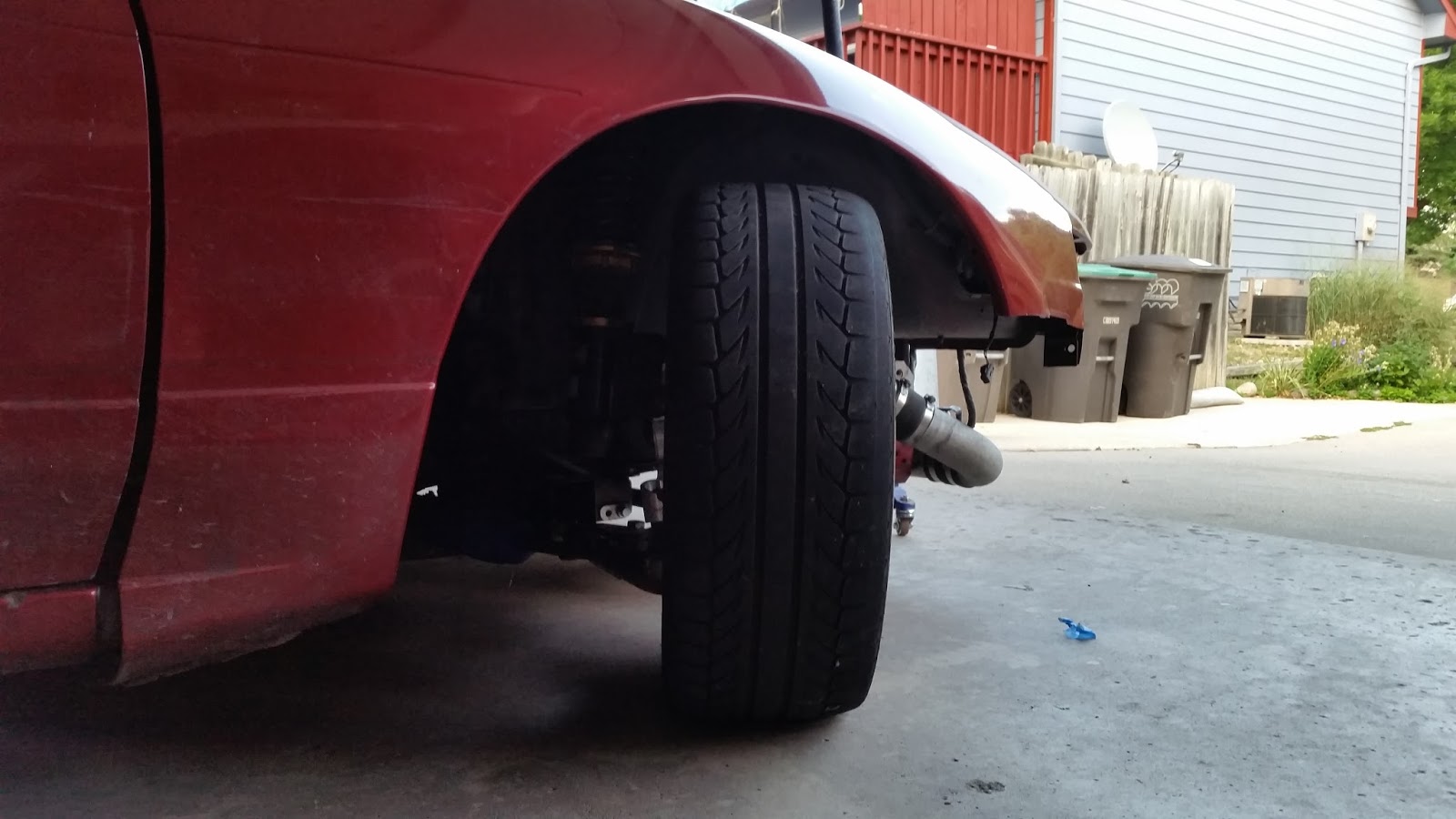 Very excited about this I took the car for a spin and a quick slide session.

This is where it all went wrong, yes they do a great job of getting the wheels flat, but they also completely murder all of the self steering.  Upon initiation of a drift when letting go of the wheel it would simply stay there and cause me to spin.  Even cruising around when turning a corner and letting go of the wheel the car would just keep turning and the wheel would never center.  Now I had always been told your caster is what creates the self steering effect but when I saw how Wisefab was keeping their wheels flat and in all their pics the coilover is basically straight up and down I figured maybe there was more to it than just caster and other factors are what did most of the work.  Unfortunately that was very wrong of me to think...

After making a quick drive home I decided to pull the caster on the LCA as far forward as I could, did another alignment on the toe, and took the car out again.

This time I had regained my self steering effect however it was still kind of sluggish compared to what it had been prior to installing these camber caster plates.  This was enough to show me how caster is one of the primary factors in self steering.  These plates had basically got rid of all my caster which in turn is what lead to killing my self steering.  Sadly I must say these plates are about as good as scrap when paired with OEM style knuckles.

So how does the Wisefab kit do it?  This was something I found myself questioning, clearly they have self steering, but if they move their coilover like these plates do than how come they don't suffer the same issue?

Well here's the answer.  I'll start with a quick drawing comparing a stock knuckle to a wisefab knuckle installed on a car.  The view of the drawing is from the side. 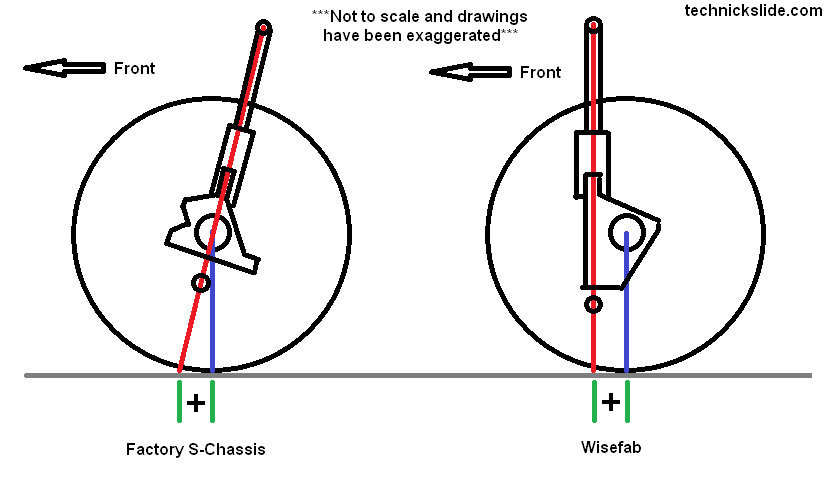 To start let me explain what this drawing shows.  The red line is the "axis of rotation", this line is drawn by connecting the two pivot points (pillow ball and ball joint) then extending the line to the ground. The blue line shows the "vertical axis", which is simply a straight up and down line from where the tire contacts the ground.  These lines are then used to measure the caster trail which is the distance between the two green lines.  When the axis of rotation is in front of the vertical axis it is called positive caster, when the other way around it's called negative caster.  Now I should point out I don't know what a good measurement for it is or what the factory measurement is, that's something I'm still working on trying to learn. So far from what I've figured out there's a lot of personal preference that goes into this since very little will make the steering incredibly sluggish and too much will make it very hard to turn when moving.  On the factory setup moving your caster forward will also increase camber change while turning which could cause incredibly poor use of the tires making you loose front grip and potentially suffer from serious understeer issues as well as very poor and quick tire wear.

Looking at the drawing you'll see the stock knuckles axis of rotation is at an angle with the top of the coilover leaning back towards the firewall. Doing this projects the axis forward and ahead of the tires contact patch.  This is needed to have self steering. This pulling or "trailing" of the wheel is what causes it to steer straight and get the wheel pointing in the direction the car is going.  Adding more angle will increase the caster trail and in turn lead to a stronger self steering effect, but like stated before, it can also have some negative effects on camber change.

With the Wisefab knuckle you'll notice the axis of rotation isn't at an angle, instead it is straight up and down (please note this is simply like that in my drawing, I don't think the actual Wisefab kit has it perfectly straight up and down but I do know it's incredibly close to being that way).  If this was done with a stock knuckle you would run into the issue I had since that's exactly what I did when I installed my camber caster plates.  So what did they do to keep the self steering effect?  They moved the spindle location back towards the firewall.  By doing that, it put the axis of rotation in front of the tires contact patch and created the needed camber trail in order to have self steering.  This trick is what allows them to keep a flat contact patch throughout turning giving them more front grip and eliminate very poor tire wear to the outsides of the tires.  Of course I've heard some people argue that it provides too much grip as some people desire a touch of understeer when at big angles.  This of course is a thing of preference from driver to driver.  It could very well make a difference in performance making in better or worse but I have yet to see anything saying if it's better or not.  I would assume sprint cars don't take this approach for a good reason so it might not be a great thing after all.

Both of these work the same way and if you're still a bit puzzled about this simply take a look at your computer chair you're sitting on (given it has wheels) or a shopping cart next time you're getting groceries.  Pull your chair and see how the wheels always follow in the direction you move it. 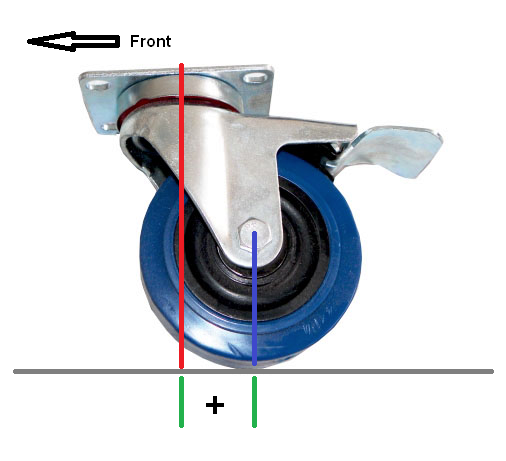 Keep in mind this is only going over how caster works, there is much much more that goes into self steering, king pin angle being one of them which partly works the same as caster angle and has an added part which uses the weight of the vehicle to naturally make the wheels want to point straight.  This is a subject I'm still working on understanding better and might potentially go over in the future.  For now, I'll just leave the post here.

Thanks for reading!
Posted by Nick (Technick) DeVries at 11:08 AM