Now that I'm done saving up for a house, bought it, got all my major expenses taken care of, and got my car running in tip top shape. I've finally found some time and money to put towards going to an event this year.  Better late than never right?

The event is being put together by O Drift Collective, it's a newly formed group based out of Omaha with big plans in mind.  Their goal is to help promote the local drift scene and get some local events going.  This October will be their first event and it should be an awesome one at that.  It's going to be held at Mid America Motorplex in Pacific Junction, IA. 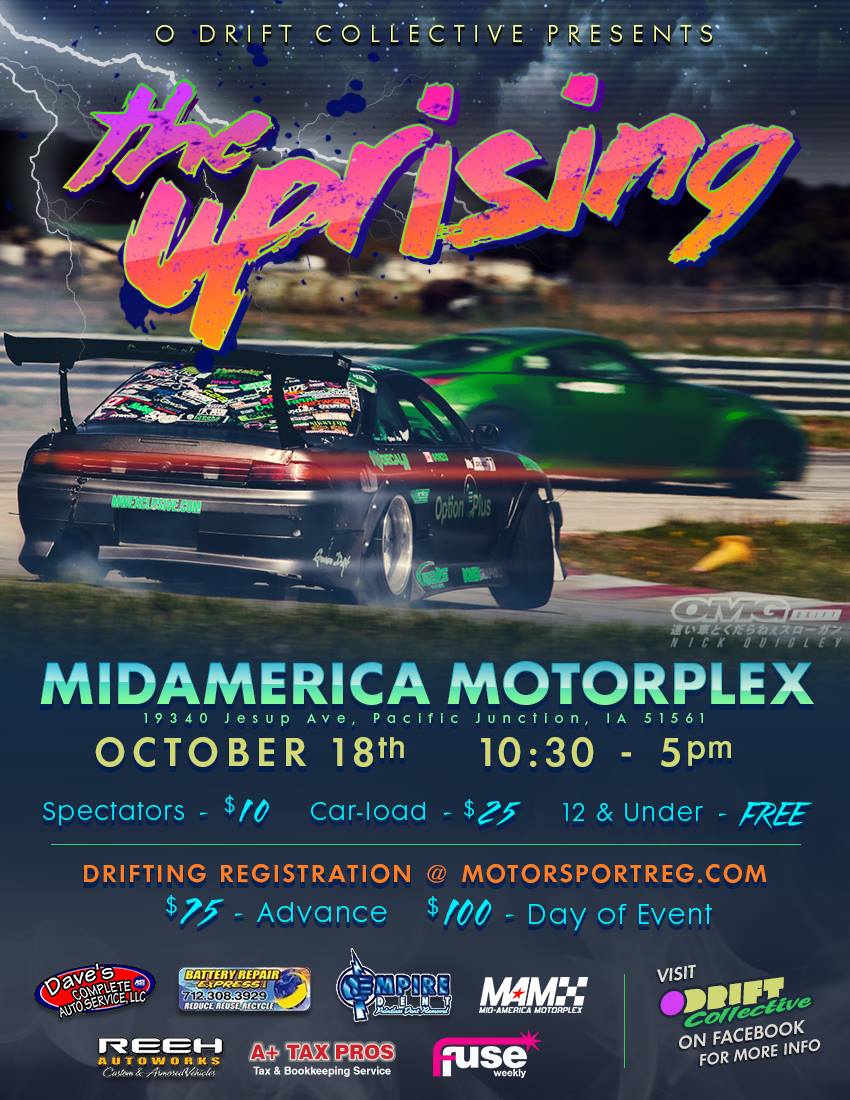 I took care of ordering some tires a few weeks ago.  My fronts are bald so I bought new steer tires as well.  I've been told a lot of good things about the Falken Azenis RT-615k so I ordered a pair of those to run up front.  I was also told even more good things about the Kenda Kaiser K20 so I ordered 4 of those to be put on the rear.  Between those and the 2 Maxxis tires I still have left over from my last event I'm looking to be all set. 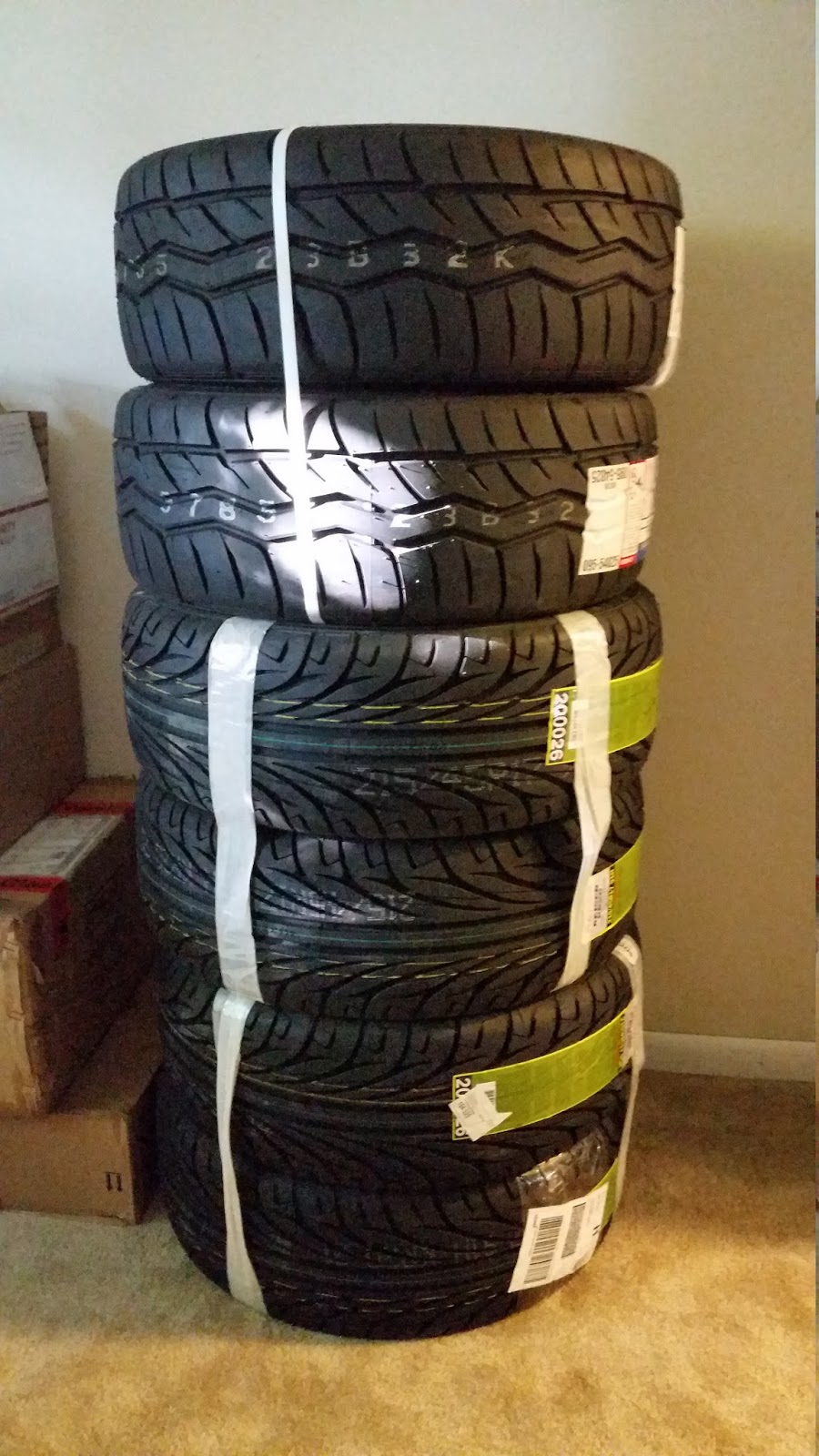 Now all that's left is to finish up testing a few changes on the car and get her all dialed in so she'll be ready to rock come the 18th!
Posted by Nick (Technick) DeVries at 12:09 PM No comments:

I know, I'm a good month late on this update but better late than never right?  Just last month I participated in a local car show.  I teamed up with my good friend Travis of Shiomi Garage and got a booth lined up for him to help promote the garage!  Not only did it help with promotions it also made for a really good time.

The night before the show people who were setting up booths got to come in and get things squared away.  The event was an indoor show held downtown Des Moines, IA at Hy-Vee Hall event center. 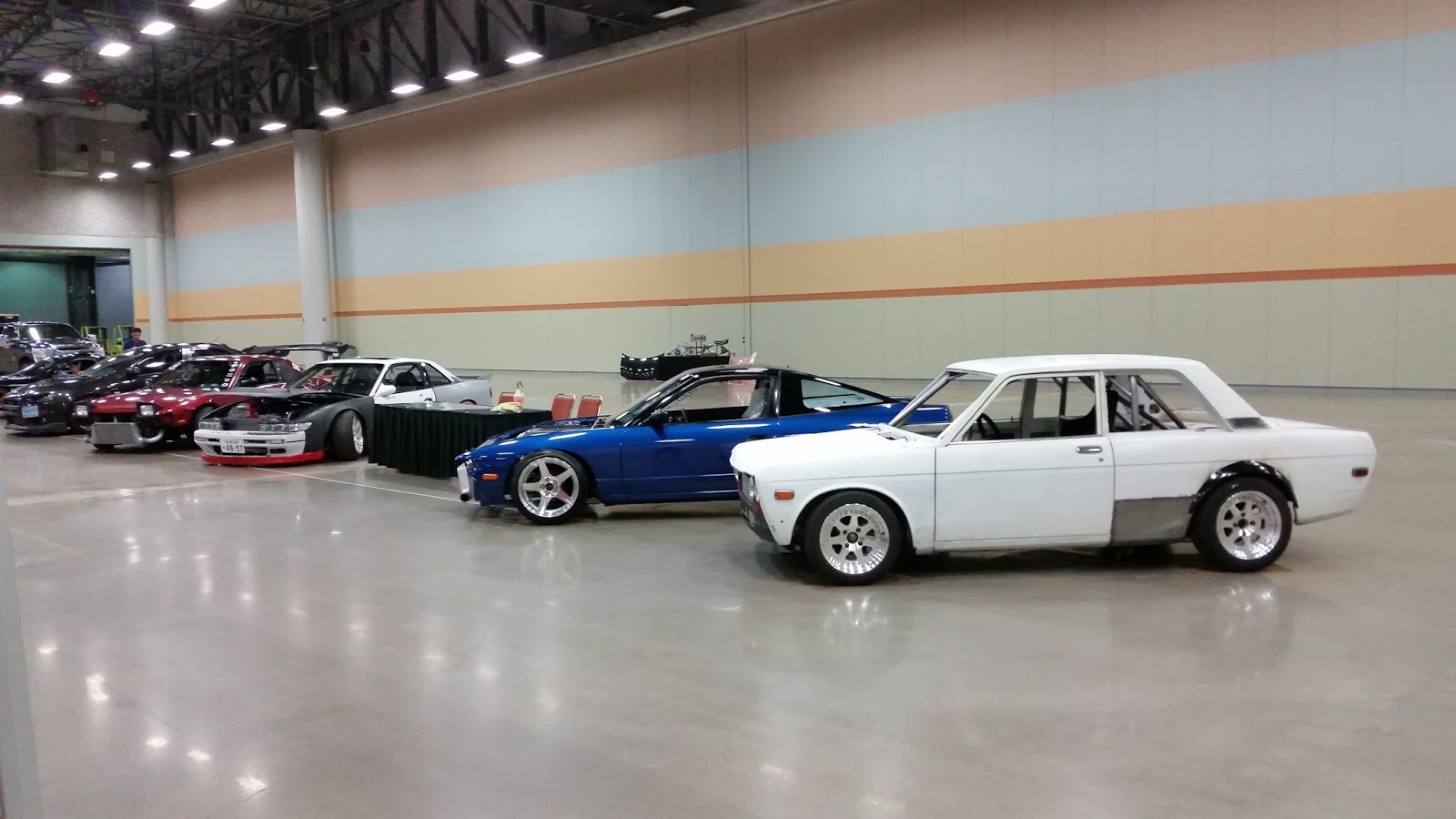 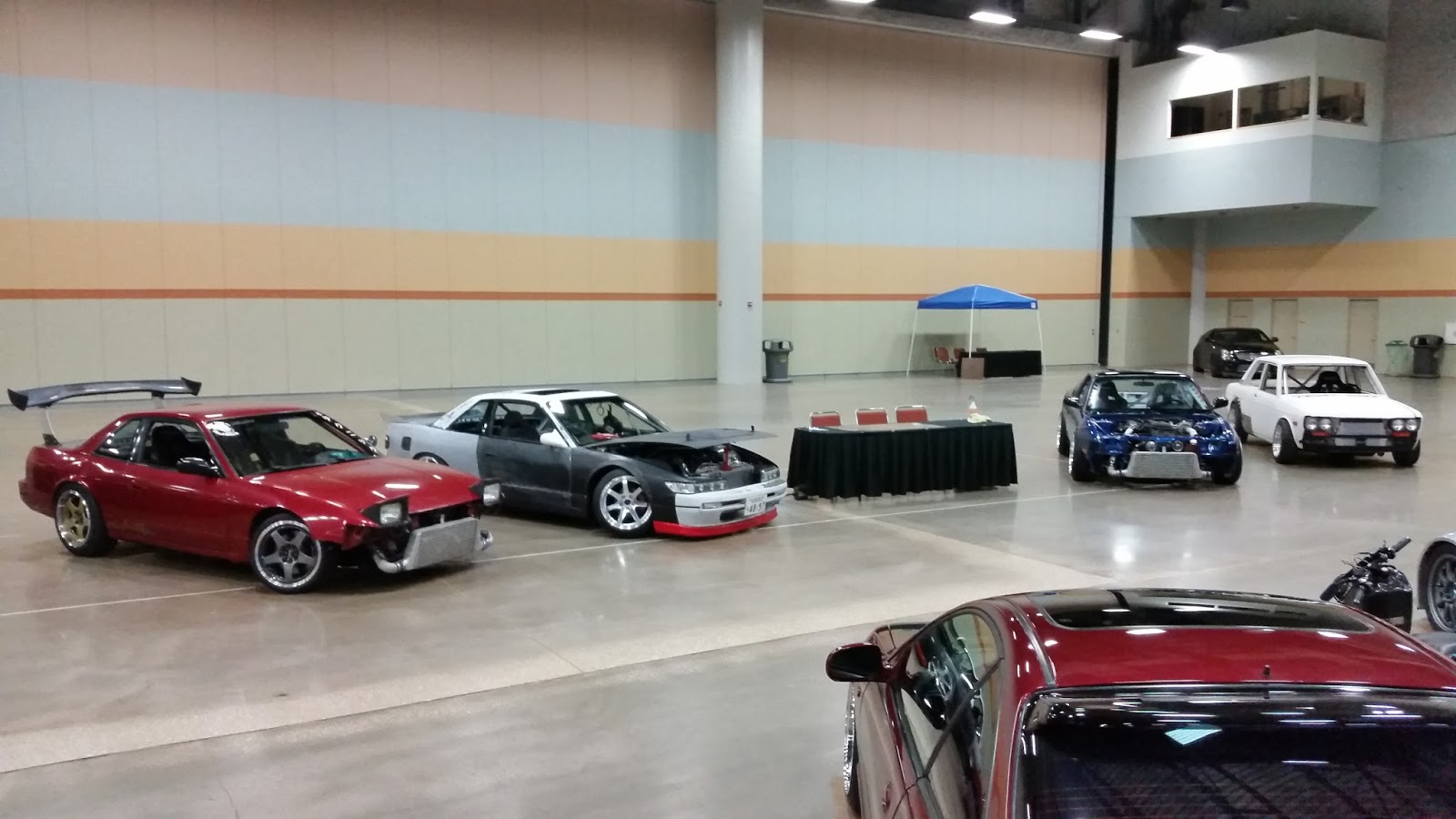 The night before we went in, got our cars lined up then hung out for a bit.  The line up consisted of Becca's 510, Luke's freshly painted S13, Travis's coupe, and my coupe, which made for a lovely little bunch of cars to show off the work he does.

The next morning we came in early to finish setting up by bringing a 50" TV as well as having Rodney of Imports USA hook it up with some awesome decals to put on the cars!  I finally got around to having a Technick Slide decal made! 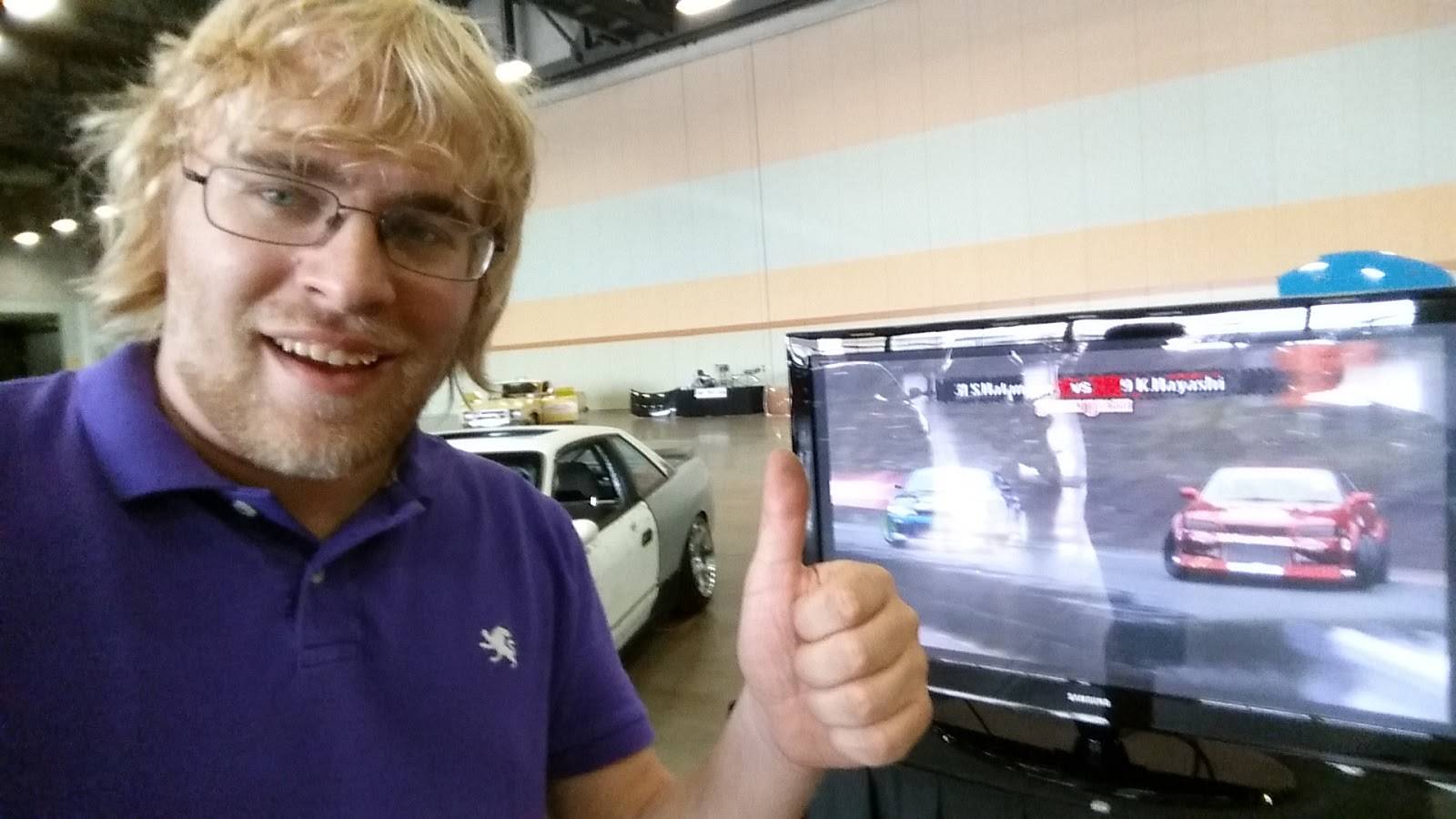 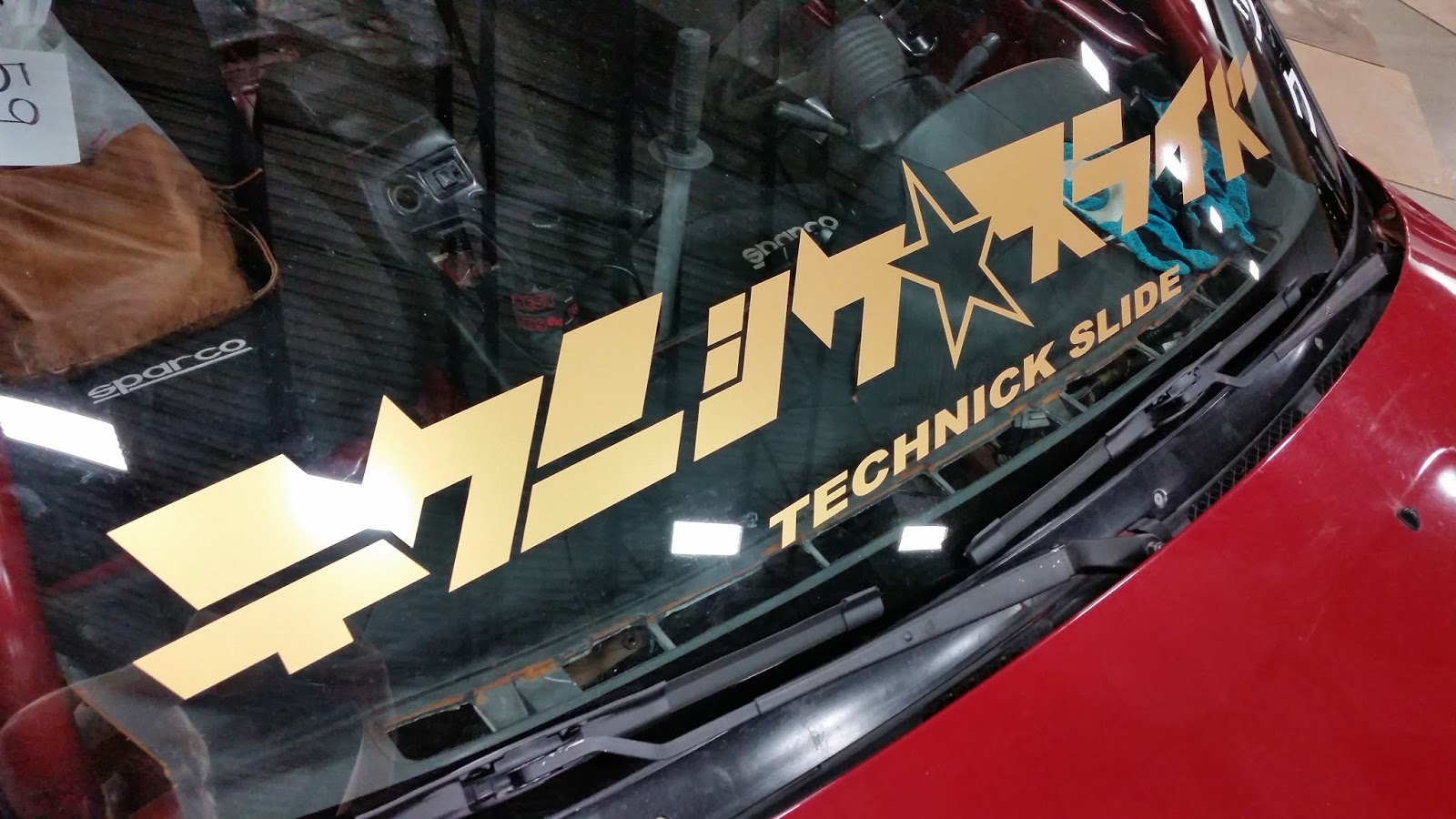 I think the decal turned out awesome!  Good colour, awesome location, and surprisingly enough, doesn't really block my view at all when driving. 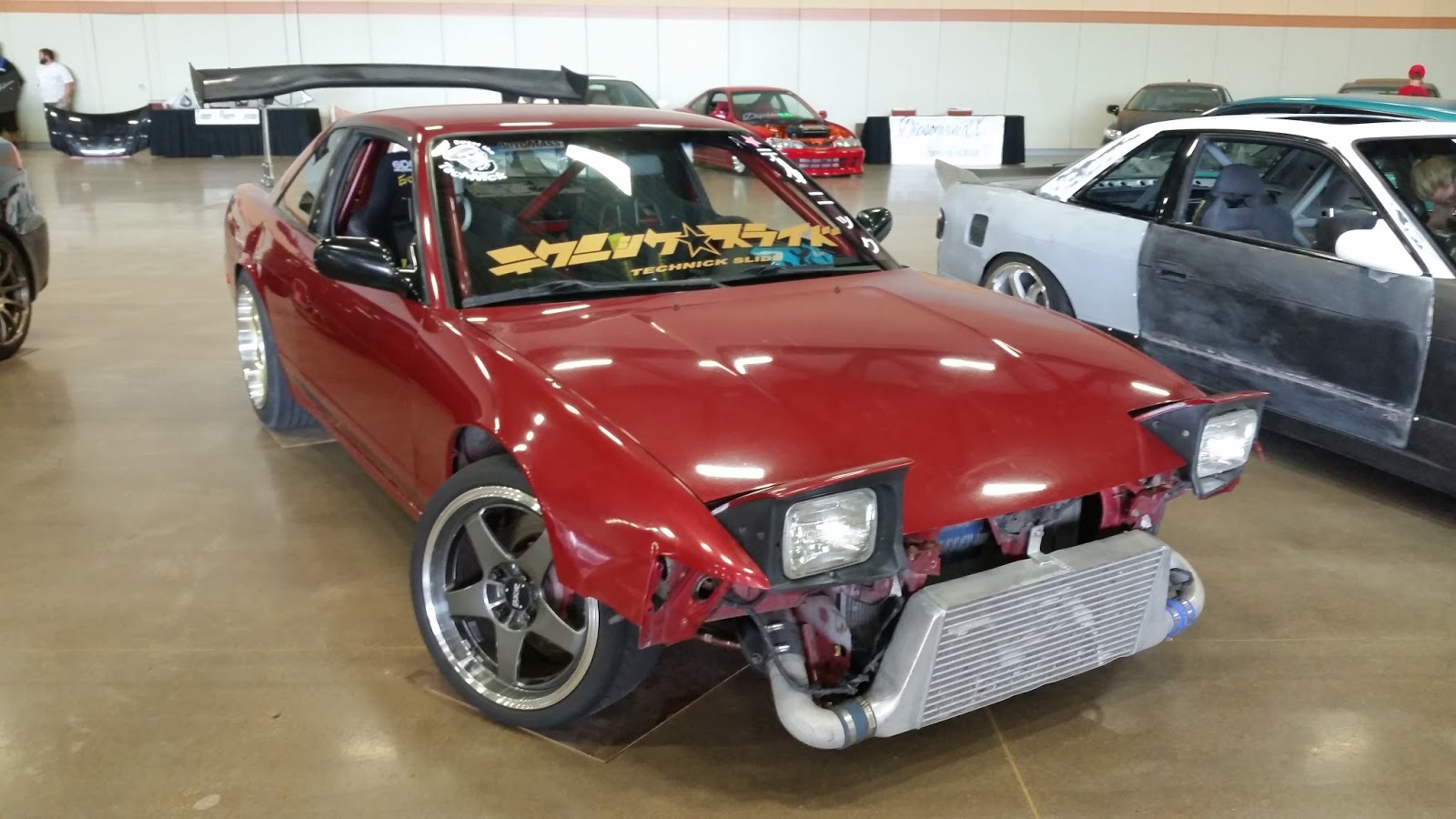 Becca was rather excited for the show to start! She couldn't wait to see what people though of her car and was also excited to show some Video Option DVD! 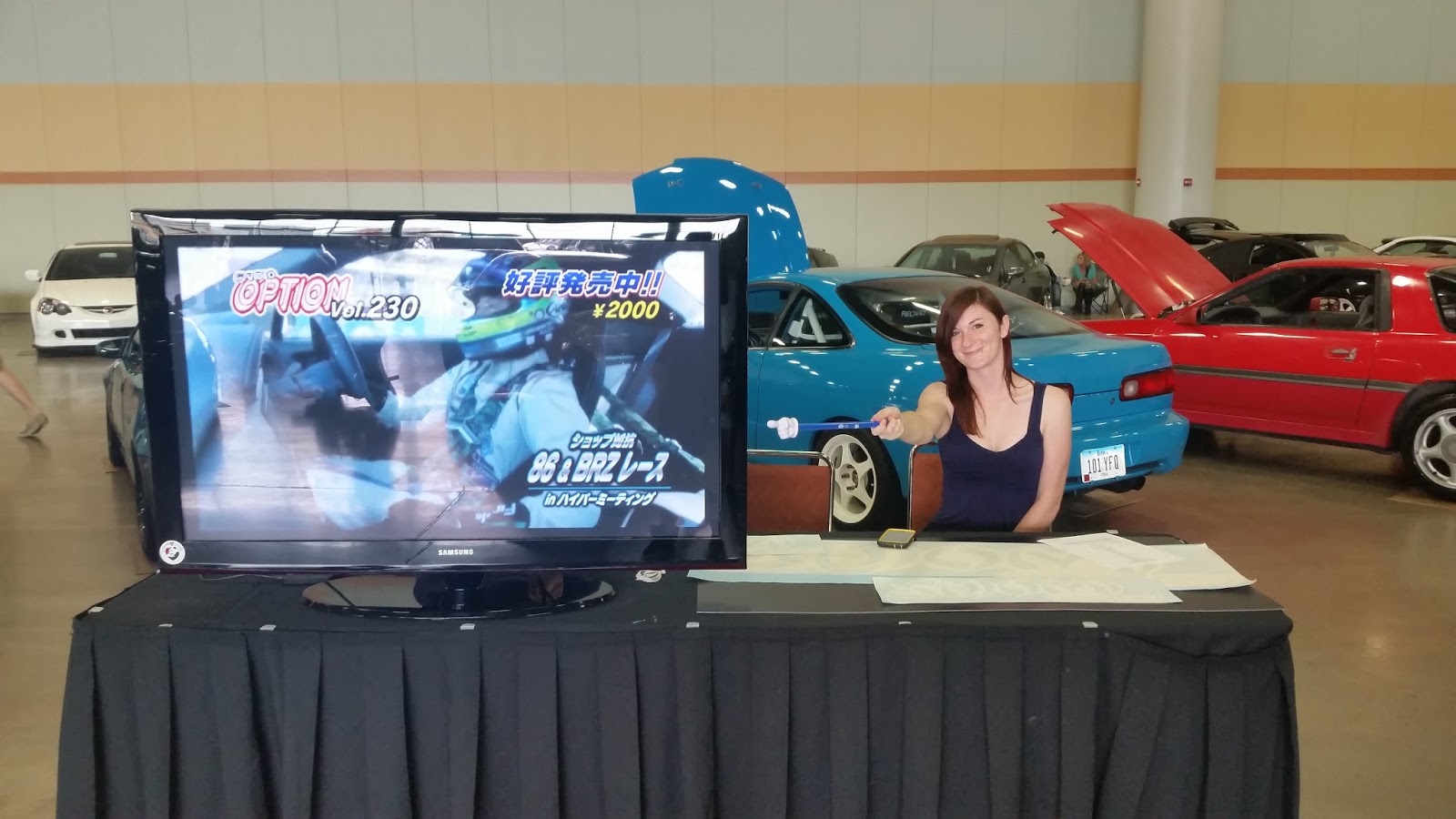 From what I could tell people were rather interested in everything that was there, they loved the Shiomi Garage booth!  At times there were nice groups of people hording the TV with their jaws dropped as they watched D1 drivers battle it out.  I even had a group of kids sit on the floor for a good half hour and just watch in amazement.  Hopefully it was inspirational enough for them to want to become drifters themselves!

I met a lot of new people, and saw a lot of new cars I hadn't noticed before, there was even a Nissan-Infiniti Club booth this year which was awesome to see!  This was the first time there was an actual Nissan crowd at a local show which goes to show the scene has been growing around here!

Like all good times, things eventually came to an end and it was time to head home, but quick before leaving I made sure to snap a few photos of the 510 before it found itself nuzzled away in a garage until spring. 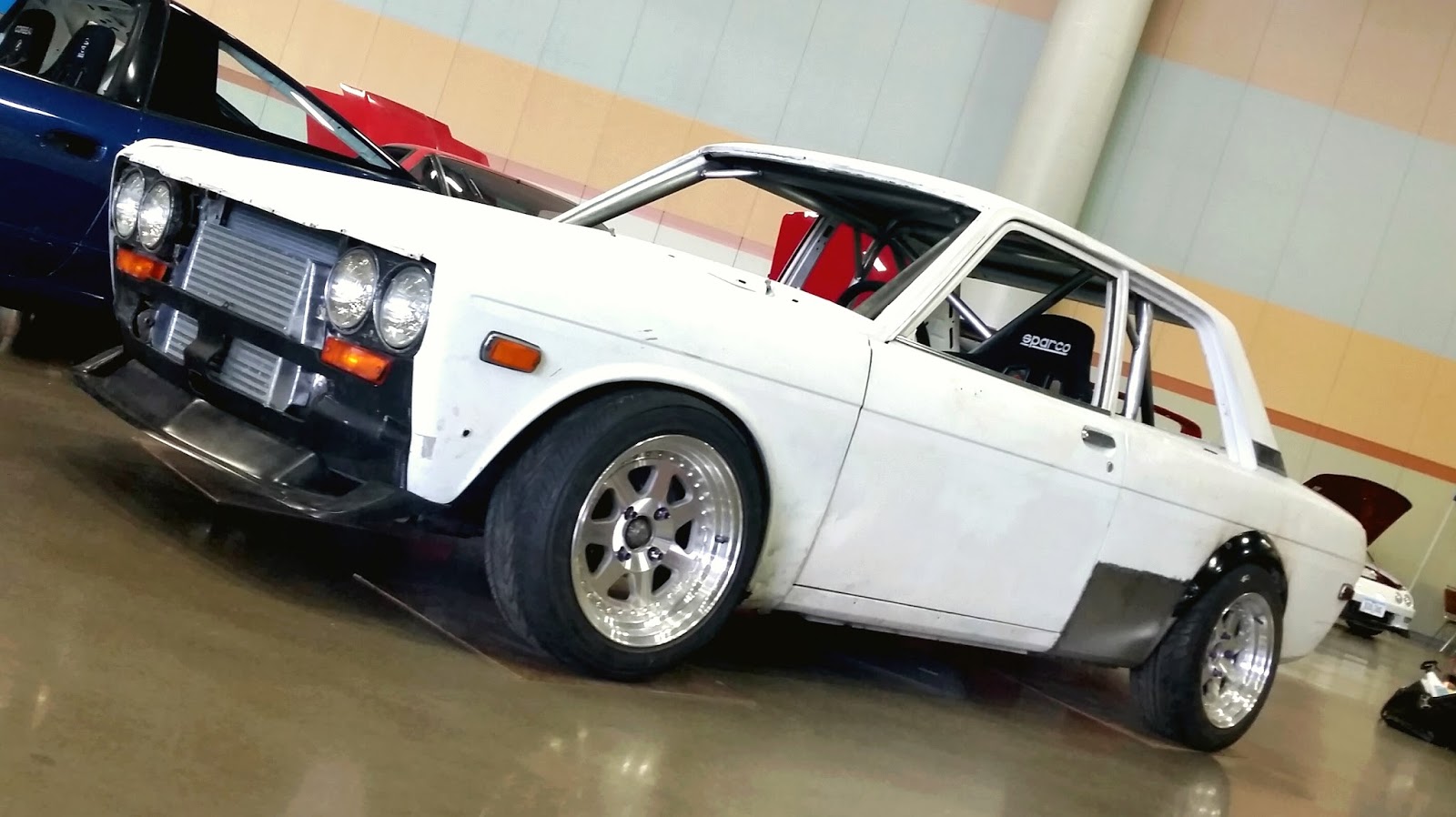 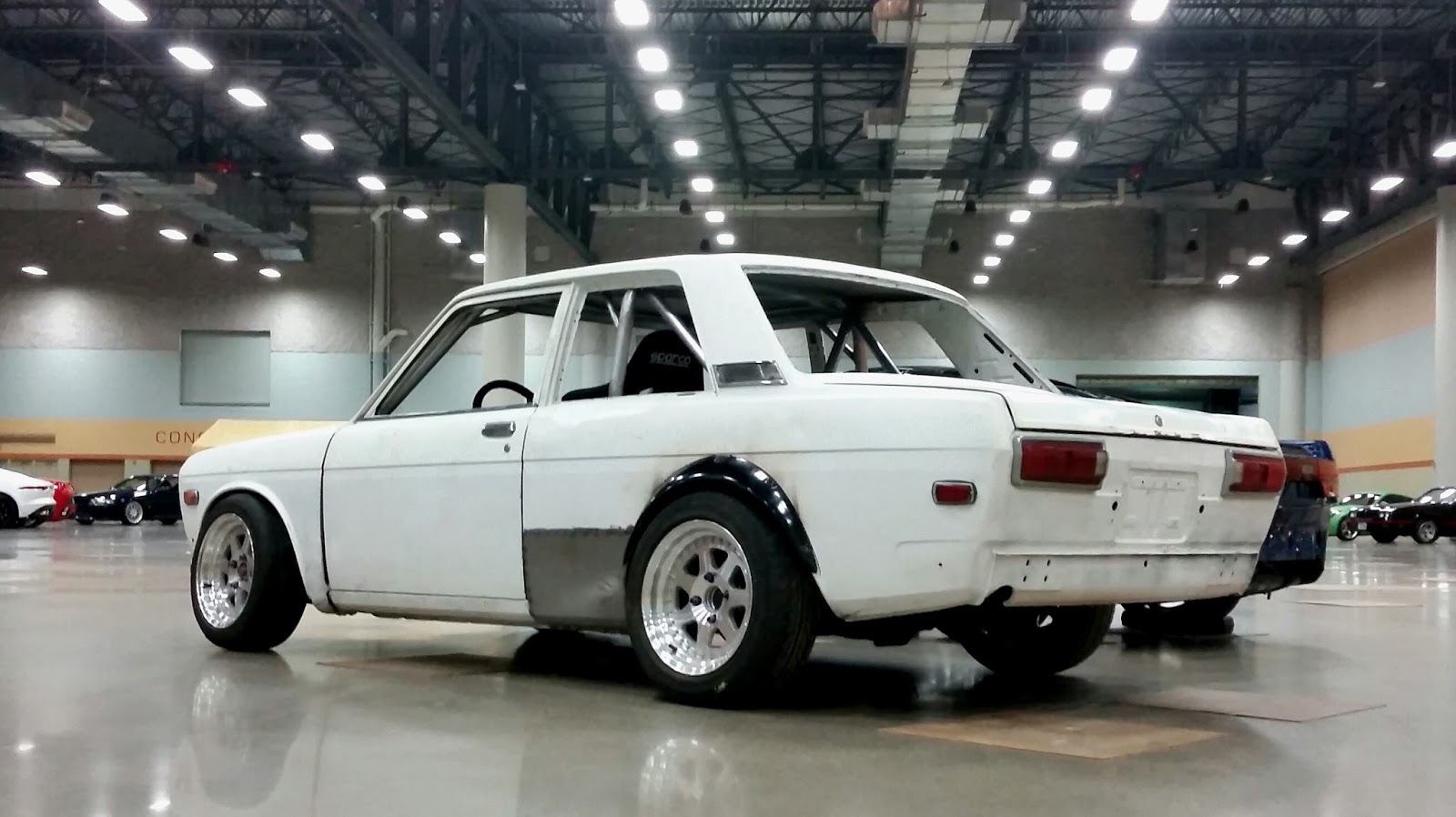 Posted by Nick (Technick) DeVries at 1:24 PM No comments:

I'm a bit late on this update, just over a month to be exact, but better late than never right?

Hopefully this will explain why I haven't had shit for drift event updates.  Becca and I bought a house! 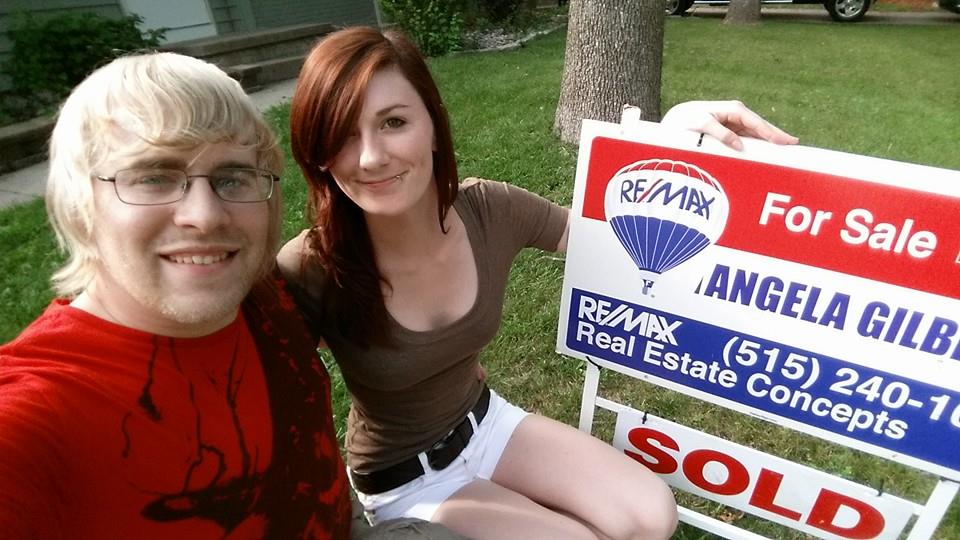 Now I finally have my very own garage that I can do anything I want with!  Unfortunatley its completely packed full of cars, tools, parts, and other misc stuff.... Soo the garage burnout vid will have to wait I guess...
Posted by Nick (Technick) DeVries at 1:53 PM No comments: