Every day I find myself seeing more and more false information spread in the drifting scene.  With it being fairly new there is a constant feed of new innovations coming out.  There are new parts and designs that are very specific to drifting, some of these things being new to racing in general.  This combined with inexperienced new enthusiast that are attracted to the scene have made this become a potentially serious problem.  It's something that I feel needs to be addressed, in order to do so I've decided to try out something new with my blog.  I'm going to begin an informational series of posts.  The goal of these posts is to share some of my knowledge and experience in order to help clarify things about different parts and explain how some stuff works.  I want to help get rid of this false information I see and hopefully help the community as a whole.

Now for a quick disclaimer before I begin.  First of all I don't know everything, I like to consider myself as fairly knowledgeable, but just know I'll be the first to admit to not knowing something.  Everything I share during this series will be subjects that I've done heavy research in and have a very good understanding with.  For most of these I will only be explaining the basics and fundamentals.  I'm wanting to keep this simple because a lot of things can get very complex very quickly and I would like to keep this easy for everyone to follow along with.  I would also like to point out that when it comes to my posts many of them will be strongly based off the S-Chassis and it's design.  Many of these things will apply to different chassis as well but because every car is different some things just can not be applied to another car.

For this post I'll be talking about roll center correction knuckles and drop knuckles.  All examples will be front suspension and S-Chassis related, for those that aren't aware the S-Chassis has McPherson front suspension so this is going to be strongly based on that.  Some things will work with double wish bone style but some things will not work and should not be done with double wish bone as it will cause issues!!!

Drop knuckles, what are they, what do they do, and how do they do it.  A drop knuckle is simply a knuckle in which the spindle has been relocated when compared to a factory spindle location.  With a drop knuckle this means the spindle has been moved upwards on the knuckle which creates a drop in ride height via the knuckle and nothing else.  This is where the drop in the name comes from.  This is the best way to go about lowering a car as it does not change the roll center of the vehicle.  Now of course there are limitations to how much of a drop can be done and like everything, you can have too much.  Double wishbone style suspension where the upper ball joint is above the wheel might not have enough clearance between the tire and upper ball joint sometimes.  So it isn't always a modification that can be done on every car.  S-Chassis and other McPherson front suspension cars do not have that issue however, so a drop knuckle is something you might very well be able to find on the market. 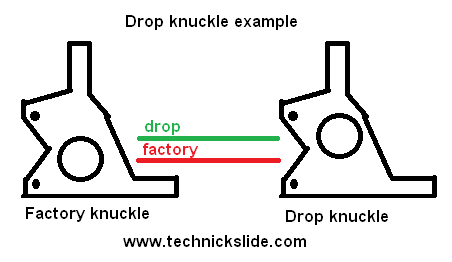 Above I have drawn an example of a drop knuckle.  You can see on the drop knuckle the spindle location has been moved upwards in comparison to the factory knuckle.  Please note there's more work that goes into making a drop knuckle than just moving the spindle upwards.  Like I said before, I'm keeping this simple and all the super in depth details will either be covered in a future post or I might leave it up to you to research for yourself because I don't feel a need to discuss it or I might not want to tell everyone so I can hopefully have an advantage over the competition.

Moving on now, lets talk about roll center correcting knuckles.  Roll center correction is another thing you will see when looking up aftermarket knuckles.  Some cars like the AE86 have bolt on roll center correction spacers that are easily installed.  One confusing thing is roll center correction can sometimes be mistaken for a drop if you don't know what you're looking at.  This is why I've decided to cover this subject.  Roll center correction on a knuckle simply refers to added material below the spindle, this added material will move the lower ball joint down farther away from the spindle.  Why do this? What does it help? It helps with correcting the roll center of the vehicle.  Unfortunately there's a lot of information that goes with understanding roll center and what it is. I'm not going to cover it in this post, all you need to know for now is your lower control arms angle has a lot to do with it and is a major factor with suspension.  Also roll center correction is not for everyone, double wishbone will run into issues here, as adding material to the bottom will change the upper control arms angle in relation to the lower control arm.  This can have some very negative effects that you definitely do not want.  There are of course limitations to how much can be done and of course you can have too much.  The amount you might need will very a lot from car to car, it is also always something that changes with ride height.  An example of when roll center correction will become helpful is on a lowered car where you lowered it with a set of springs or coliovers.  When you go lower via the spring or coilover this moves the entire knuckle upwards in relation to the car.  As this is done the ball joint of the lower control arm moves up with it, as that happens the LCA goes from being level to being at an upwards slant like a "V" when looking at the front of the car.  When you add material to the bottom of the knuckle and move the ball joint down farther away from the spindle this allows the knuckle to move upwards to lower the car and not move your ball joint up with it so you can keep your control arms level. 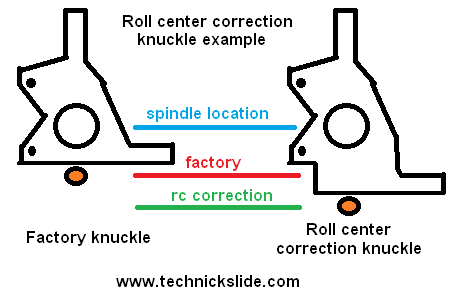 Above I have drawn an example of a roll center correction knuckle.  Notice between the two the spindle height remained the same.  The only change between these two knuckles is on the roll center correction one there is added material on the bottom of the knuckle which moved the ball joint location (orange circle) down farther away from the spindle. 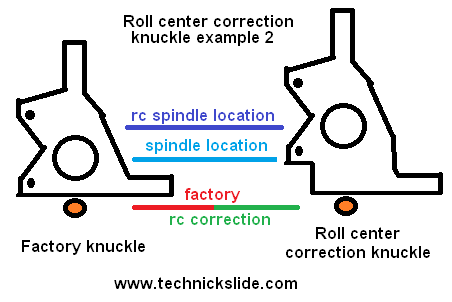 Here in the second example you can see how you're able to lower the car yet keep the ball joint at the same location as it would be from the factory, which is commonly at a good roll center location.

One thing I've noticed is due to limitations of the knuckle itself you're not always able to lower the car as much as you want when using just a drop knuckle, so what some companies will do is they will also include some roll center correction to the knuckle as well.  This is where I think the confusion comes from when looking at knuckles and why some people will mix up a drop knuckle as a roll center correction knuckle.  Just looking at a picture online will sometimes be difficult to tell the two apart so make sure you do your research and find out what exactly the knuckle is offering.

Hopefully this has provided you with a basic understanding of what a roll center correction knuckle and a drop knuckle is.  If you read this and noticed a mistake I might have made or have some information that you think should be added please feel free to contact me on this.  I want this to be as accurate as possible and be as helpful as I can make it.

Thanks for reading!  I look forward to the next post!
Posted by Nick (Technick) DeVries at 12:01 PM