The final chapter of part 3!  Welcome back to another informational series segment.  As promised for chapter 3 of part 3 I will tell you all about rack offset spacers.  Before we dive into that though I strongly urge you to read the first two chapters before reading this one.  In those I discuss how a rack works, what over centering is, and talk about angle spacers.  These are things that you will need to know about in order to continue on with this post.

Seriously, read those.  I don't care if you already know about everything I talk about in them, read them anyway to give yourself a nice touch of refreshment on the subjects.

Now that you've gone back over those it's time to get to work and get started with the final chapter of part 3!  Lets begin! 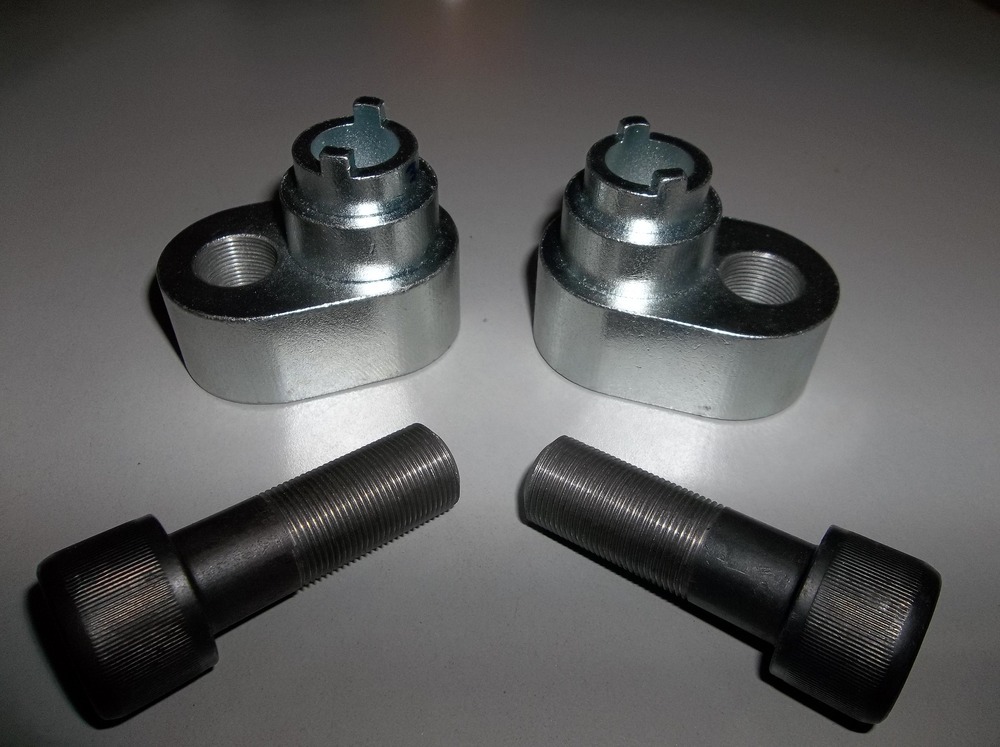 Offset angle spacers, these things are all sorts of different from manufacturer to manufacturer, some adding some angle spacers to them, others just doing the job of being an offset spacer, and others actually taking away some rack travel.  On top of those differences you have the many different thicknesses and offset amounts.  A lot of info isn't discussed when it comes to these and they are simply advertised as the "bolt on fix for overcentering" some even go on to boast about how much rack travel they add vs a slip on spacer and preach on about giving you more angle.  This has led to a very very very confusing understanding of these throughout the drift community.  A lot of people don't understand what overcentering is to begin with then they hear some other kid who also doesn't understand these talk about how awesome they are because he saw someone put these on their Pro/Am car and that Wisefab uses them as part of their kit.

It's time to end the confusion and talk all about what these things actually do, how they do it, and what all they effect.  For starters lets get down to the basic idea behind these and what their basic function is.  They are what they have been advertised as, a bolt on fix for overcentering.  Now if you've actually read chapter 1 of part 3 like I told you to then you'll know what overcentering is, and what the fix is for it.  You'll know that in order to rid yourself of having overcentering issues one of the fixes is to move your rack forward.  This has been THE FIX for a long time, then one day someone realized a way to make a bolt on fix and the offset spacer was the outcome. 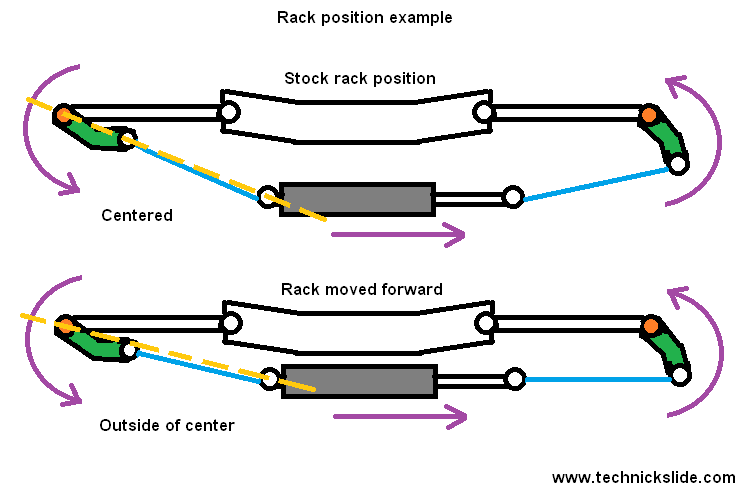 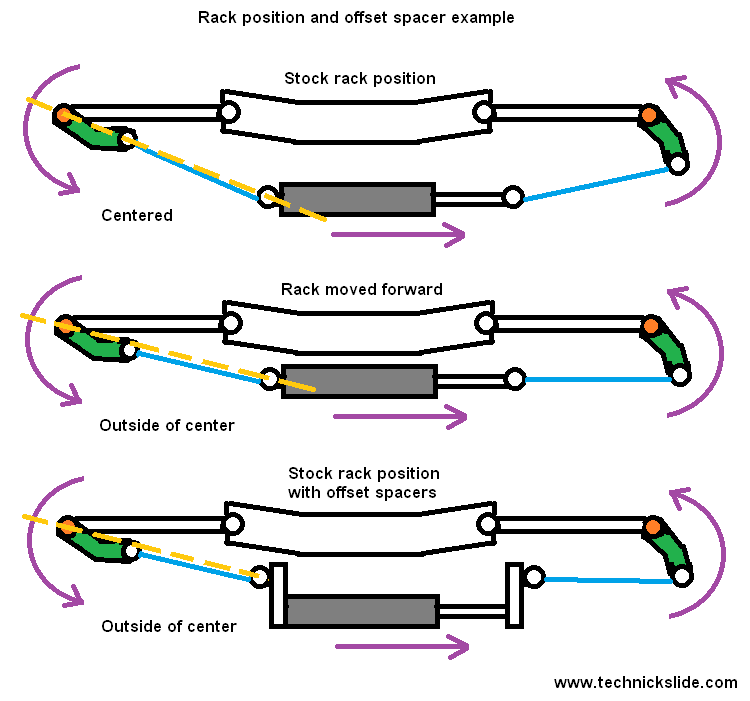 Here in this example you can see how they work.  The top rack in the above picture shows an example of running into a centering problem, moving down you'll see where the rack has been moved forward to fix the issue of centering or overcentering.  Now for the bottom one you can see the offset spacers in effect.  These are bolted onto the ends of the rack and then the inner tie rods are bolted onto those and offset from the standard position moved forward.  Keep in mind for a front steer car this would be flipped. 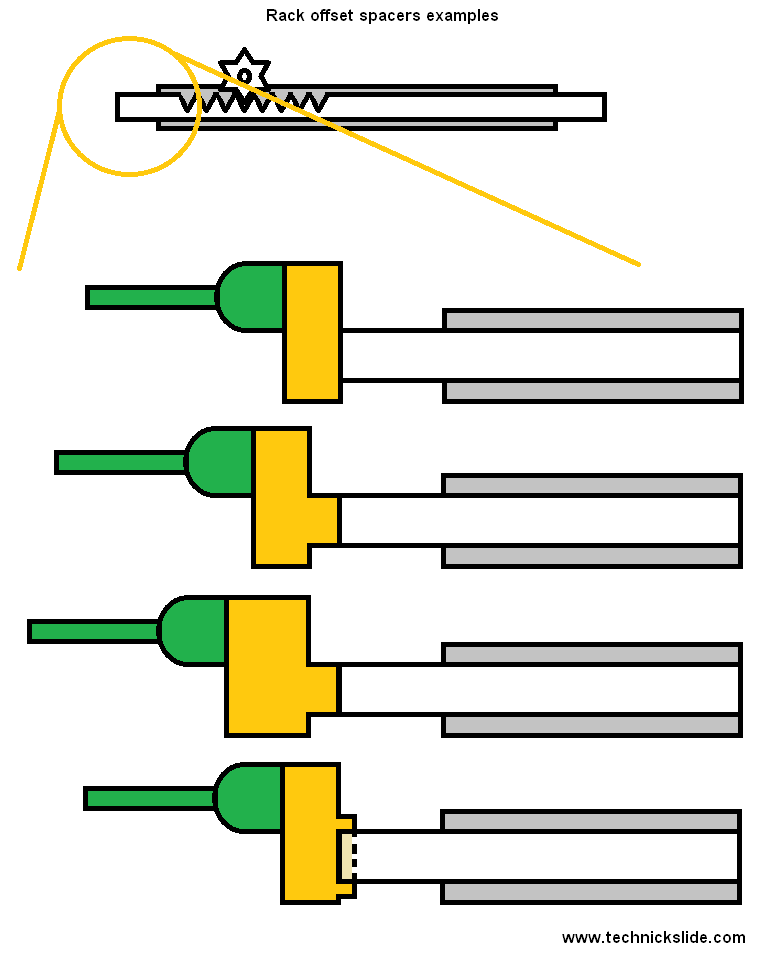 Above I've drawn 4 of the most commonly used style of rack offset spacers.  The top one is just your simple offset spacer, second one down is one with an added angle spacer built into it, third down we have the same thing as the second however this one is a lot thicker and stronger, and lastly we have the bottom one which actually goes over the end of the rack and takes away some rack travel.  Each have their own advantage in one area over the other and they also have their own downfalls in comparison.  The top one doesn't add any angle where as the middle two add angle, but if you recall back in chapter 2 adding more material starts to effect your bump steer. The second one down is weaker in comparison to the third one but the third one has more of a negative effect on your bump steer.  You can see how there's always a compromise being made when deciding on which one to go with.

These aren't even all the options out there, some offer more of an offset to them in comparison, and thicknesses are all over the place, not just thin or thick. There's also angle spacer addition variations, some adding more travel than others.

So now you can see why people start to opt for these vs moving a rack forward.  They are cheap, you've got all sorts of different options to choose from so you can find the perfect match for your car, and they also have the ability to add angle to your steering.  Right about now these things are probably sounding great, right?

Well let's talk about the downfalls, the things you don't hear about, the things people don't realize these things do.  There's a reason why you won't find a pair of these on my car and why I tell people to avoid these like the plague.  They have some serious problems.

The first of these problems is the incredibly negative effect they can have on your bump steer.  If you remember the bolt on angle spacers start to add some noticeable bump steer, then you might have already realized these too have that same problem, only now it's made even worse as these bolt onto each side of the rack and make your tie rods even shorter.  Then there's those really thick beefy ones that add a ton of angle spacer to them as well, those are even WORSE when it comes to bump steer effects.

Think that's bad?  Well let's talk about the real problem these things create.  Ever heard someone who is running these start talking about their rack going bad?  What am I talking about, of course you have.  These things bend and break steering racks, and I'm not just going to tell you this, I'm going to show you how this happens. 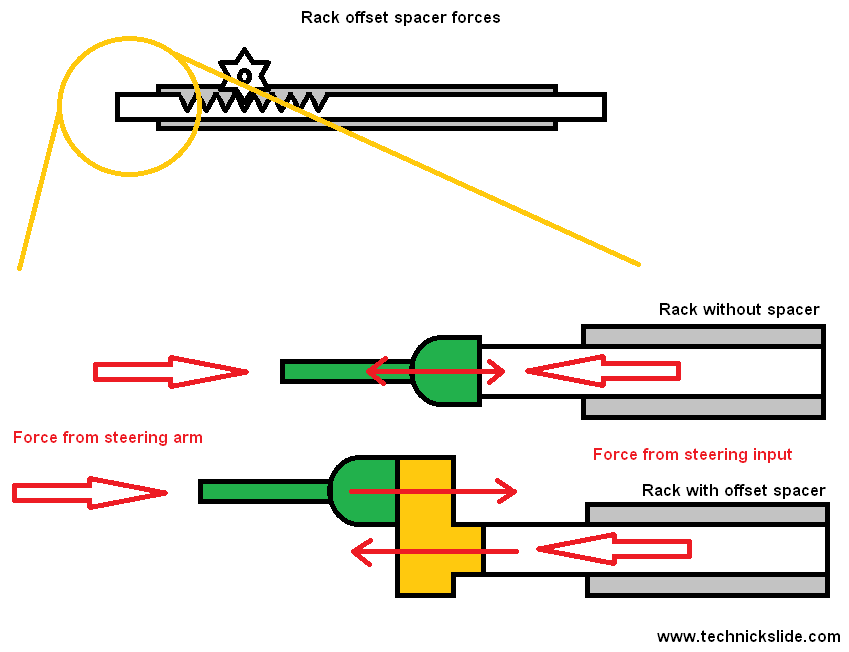 As taught in school, for every action there is an equal and opposite reaction.  This means as you turn you create a force that pushes the rack, with that force there is an opposite force coming from the steering arm pushing back against it.  With no offset spacer this will center the two forces as they push against each other keeping your rack happy.  However with an offset spacer this not only offsets the tie rod it also offsets these two forces.  If you look at the drawing above you can see I've drawn this. 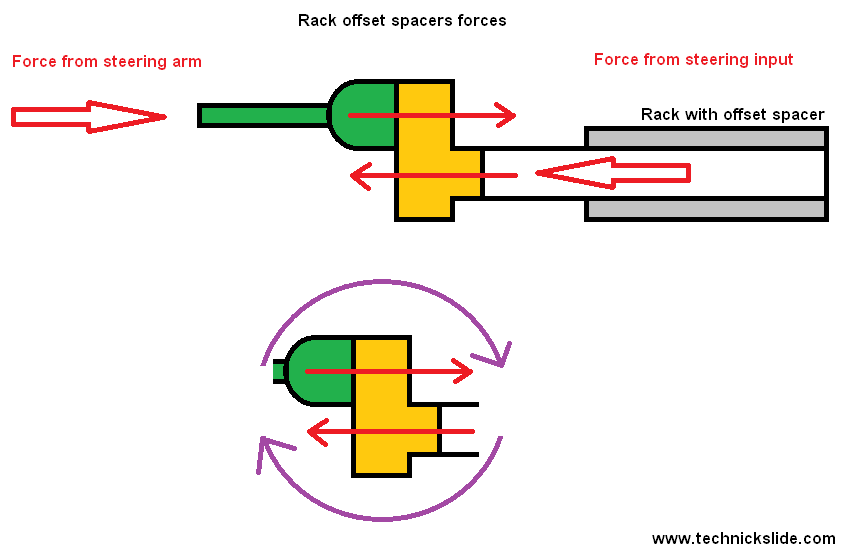 So what happens when these forces are offset like this?  This creates a twisting torque.  Think about it like this.  Say you have your car jacked up and you have a wheel that is able to free spin.  If you push on both sides in the center the wheel wont spin, but if you push the top of it in one direction and the bottom of it in the opposite direction you know that wheel is going to spin.

This same exact thing is going on here, only its not a wheel, it's a steering rack, and unlike a wheel a rack has a solid fix to it and it's not supposed to spin to twist.  This means the rack is now taking on a twisting force which it was not designed to have, which leads to bending the rack.  So why does the rack bend and not your tie rod?  Well, the tie rod has a pivot point right there on the end bolted to the offset spacer, this is able to easily pivot when the force is applied, so that doesn't take on any of the force and all of it is then transferred to the rack.  Take on enough of a force from running grippy tires up front, hitting bumps, or tapping another car while tandem drifting you can soon see how this can become very strong and way too much for a rack to handle.  Once you put enough stress on the rack, it will bend and be too bad to continue using.  Sometimes it might take a while, other times you might not even make it through an entire event.  A few people I know who run these have had to replace their racks 5 or more times in just one year!  So take a bit of advice from me on this one, save yourself the time, headache, and money.  Get some fab work done and move your rack forward before putting these on your car.  Your car will drive better and it'll be much more reliable, you'll be very glad you did it.

This is where I'll end this chapter and close the book on part 3.  Hopefully this has answered some questions you've had about these and has helped you decide if this is something you want to run on your car or not.  I know I'll never run these on my car or ever recommend them to someone, but I'm sure some people just don't have much of a choice.  I know some companies find themselves in that very same boat of not having a choice, as they are marketing a complete bolt on kit.  Telling someone they have to do some fab work in order for it to work out exactly as its designed will scare away customers.  So don't go around knocking on people for running them or ripping on a company for making these.  Sometimes there isn't a choice and these have to be used.